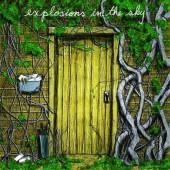 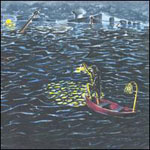 All of a Sudden I Miss Everyone

All of a Sudden I Miss Everyone is the apocalypse described in panoramic Hollywood vision; it’s an over-calculated, nominally visceral assault designed for maximum impact. Any emotion it actually earns is muted for the very fact that it is so obviously intended to make an impact; this album functions on dramatic cues, not drama. Explosions in the Sky (EitS) long ago mastered the art of the slow crescendo as the most efficient way to unleash their inner demons, and that formula has typically produced music more aggressive and exhausting than the most high-octane rock ‘n’ roll. While on previous albums, this exhaustion resulted from the powerful catharsis the band inflicted on the listener, here it translates to numbing over-saturation. Perhaps it’s simply a bi-product of running a distinct formula into the ground, but this album tries to create so many cathartic moments that it nullifies their impact.

A professor I had for a twentieth century popular music course discussed punk as music that privileged noise and texture over structure. Because punk, like minimalism, changes so little over the course of a song/album it requires a kind of in-the-moment engagement with its sounds. That also means you can leave and come back without worrying about “missing” anything. EitS once represented an opposite to this notion; though their music prized texture and noise, their music was narrative, consistently referring forward and backward to an ever-changing dynamic. For it to make sense you had to follow the entire path each song laid out before you. All of a Sudden I Miss Everyone, likewise, has climaxes of high-action, valleys where the band catches its breath and prepares for the next crescendo, and plateaus where the music plays on inertia. But these dynamics produce an overwhelmingly homogenous effect: the general flurry of routine activity. It’s like a mountain you’ve climbed before, and its valleys no longer act as rest stops for subdued reflection. Instead, the band is always building to (or recoiling from) their intense climaxes because…that’s what they do, right? If there were strong melodies here to make the climb satisfying in and of itself, this might be forgivable, but the band is in such a rush to reach its peaks and valleys. You can leave and come back; believe me, you already know this story.

So EitS’ new album will likely leave you shortly breathless (you still have to climb the mountain) but will offer little long-term emotional impact. Though tension is palpable from the opening low rumbles of distortion, that’s a rudimentary and played-out trope of the genre typical of the overwrought clichès that plague the album. Consider the first few minutes of “It’s Natural to Be Afraid” where high ringing guitar notes form minor chords that would be introspective and melancholy were they not undermined by the formless, distracting noise beneath. Throughout the song, the contrast between delicate and harsh is obvious enough to be grating, even manipulative. You can almost see the band imagining the Friday Night Lights football game -- the team’s despair at failures before halftime; their ultimate victory borne from solid Texan fortitude -- the song will soundtrack.

Shorter, transitional tracks like “What Do You Go Home To?” and “So Long, Lonesome” make me wonder whether EitS might have been better off going for full-on attack. That comically delicate piano is such an obvious attempt to counterpoint the rest of the album, and while these tracks could have been more developed, their brief existence (4-5 minutes, which practically qualifies as an interlude, in post-rock terms) dooms them to drown in a sea of manipulative juxtapositions. Longer tracks like “The Birth and Death of the Day” and “Catastrophe and the Cure,” though absent of the bombast present on the rest of the album, come across like outtakes from The Earth is Not A Cold Dead Place (2003). EitS might also have been better off trying to develop the ideas from that record instead of trying to pair that album’s crisp, chiming guitars with the aggressive climaxes of Those Who Tell the Truth Shall Die, Those Who Tell the Truth Shall Live Forever (2001). Without the wall-of-guitar production of the latter, All of A Sudden I Miss Everyone works on percussive shifts; these are less absorbing than they are agitating.

If this is EitS attempting to summarize and compact their three previous albums into one easily consumable package, the results merely drag the listener along through series of “catastrophic” cues that tell them what they should be feeling. It’s lazy writing; it doesn’t earn its emotion (EitS could look to the wonderful Friday Night Lights and the way that television show actually uses their music for direction in this respect); the shifts in mood outline only the most reductive portraits of actual emotions. Gut-wrenching action is one thing, but All of a Sudden I Miss Everyone is less Sam Peckinpah than it is Michael Bay.