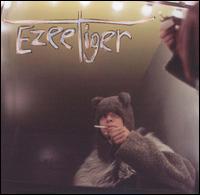 As if the insistent guitar and synth doodles of opener “The Tiger Bounce” hadn’t forecasted some sort of oncoming rockout, I put this album on loud. Very loud --- loud enough that when, a minute in, an unstoppable onslaught of Alec Empire drums razed the foundation of my hearing and a deep, toneless roar enveloped the guitars, I threw out the low end of my stereo. When I played “Darling Nikki” later that night, the bass came out as crackled, heartless pops. So thanks, E-Zee Tiger, you broke my shit. Prince is gonna be pissed when he hears about this.

Too bad the album’s, like, so fucking worth it. E-Zee Tiger is a dude in a bear suit that single-handedly constructs fuzzed out, hook-laden death rawk juggernauts of the most primal order; think Lightning Bolt covering Yoshimi Battles the Pink Robots, and you’re getting close. Here’s how it works: E-Zee grabs a guitar and lays down an invariably catchy riff, something sauntering and bouncy. He loops the riff and adds some delay. Then he grabs, let’s say, a bass, and runs a couple loops while crooning something vocodered; he loops all that, adds some delay, drops a keyboard line, loops it, and then gets behind the drums. Then he waits.

And then he waits some more. And then, at a moment so assaulting and cataclysmic as to have been deduced using advanced calculus, E-Zee launches into the most adrenal, visceral, skin-thrashing drumming I’ve heard in years, like a werewolf in a cage being poked with sticks. This shit draws blood, yo.

“Hi, kids, you look bored. Wanna play a little rock guitar with me?”

Yeah, we do. That spoken word introduction to “How to Rock . . . for Red Bennies” is the only non-alien noise on the album. The most straightforward track here, it doesn’t stray too far from a basic old-school punk workout. The only other song not steeped in E-Zee Tiger’s bombastically bizarre psych-thrash sound is “Lil’n Organ Thang” --- a throwaway track if there ever was one, but on an album that closes with a 12 minute aural acid trip like “Ballad of the Scooter Heshian,” a bit of confounding excess is excusable.

But any album by a dude in a bear suit with a song called “White Castle Gestapo” is gonna be okay by me, even if it does suck. Which, in a way, E-Zee Tiger does. It’s certainly not a great album, and in a way, it’s not even a very good one.

It is, however, an awesome album, which I mean as the most sincere praise I can level at something. This album is so confident in its own innate awesomeness that as one guitar line pulses for five fuzzy minutes into the next hissing-and-squealing-and-cooing-and-flailing guitar line, the only thing not boring the listener to tears is the sweepingly comprehensive awesomeness on display.

Plus, my roommates fucking hated it. Some things are worth a broken stereo.