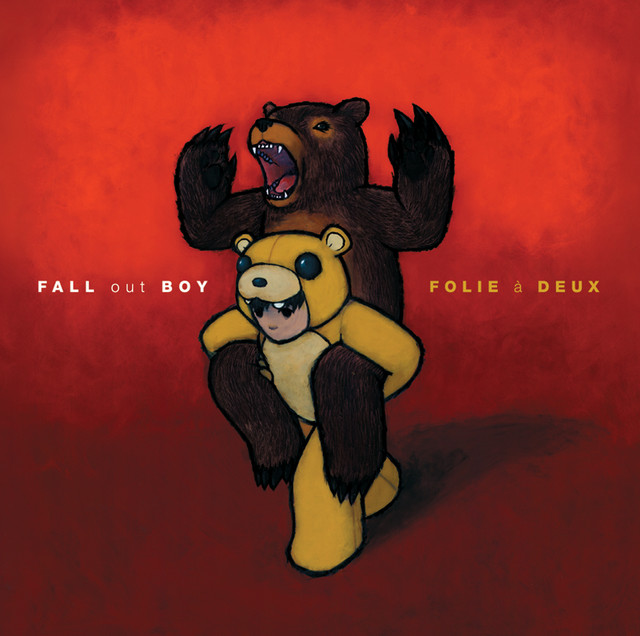 This is a power-pop album released by the biggest Fall Out Boy-ish band working today, on a major label, but it’s also 50.4 minutes of Fall Out Boy music—an extended, incomprehensible and surprisingly marketable clamor, ambulance siren loud, of contradictory signifiers. It is Fall Out Boy as four-headed hermae, guardian of the borders of Fall Out Boy, stentorian, phallic, and unwelcoming. Through Folie à Deux, Fall Out Boy both fertilizes and justifies Fall Out Boy, a feat so granite and overwhelming that there is simply no choice left for the listener, the person defined not by aural exposure but by a willingness to explicate Fall Out Boy, but submission.

Though I like horns and I like Fall Out Boy but I don’t like Boston, I’m still flummoxed by Folie à Deux to the point of admitting Pete Wentz’s utter impenetrability. (I don’t care what anyone says, PW, Ashlee’s a catch. She even hyphenated her last name while you didn’t do shit to yours. That’s. So. Ballin’!) It’s exhausting. His lyrics, while phenomenally more lucid than anything to birth from his ilk in ages, are a mess of solipsism (being Fall Out Boy) and assonance (hating Fall Out Boy)—which are both supposed to be fun according to the logic acquired from listening to Fall Out Boy. Then, of course, listening to Fall Out Boy involves adapting to the astounding number of good ideas, totally without focus, that Fall Out Boy cram down each song’s gaping maw, and then grinding Lil Wayne into guttural. In Wayne’s stead, Fall Out Boy succeeds in shoving Fall Out Boy into our gaping maws, and it feels so right that they do so. I still get goosebumps during the Auto-tuned bridge to “Ashley Blews,” but that’s only because I can imagine Wentz, Stump, and Weezy mixing it up in the studio. Straight-edge my ass, Pete. I have trouble believing that music so cluttered with longing to be something else could have been made by anyone else than a Pete Wentz and a Fall Out Boy that haven’t explored the indulgent breadth of being Fall Out Boy. Fall Out Boy is both made of hellfire and made of cool dudes. And cool dudes do drugs, ok?

By the standards of Fall Out Boy, Folie à Deux is a departure from their earlier work but also confident in honing their sound even as they explore venues in sounding like Falco, say, or Billy Joel. Guitars crash in from every conceivable horizon, surrounding poor Falco and poor Billy Joel; “Disloyal Order of Water Buffaloes” is near perfect Fall Out Boy music, expanded until it fills the universe. By that I mean that Fall Out Boy—either some arsenal of the zeitgeist or a stilling basin for mainstream post-universe—must somehow be the funnest shit I have have ever listened to in my life. If it isn’t, and “America’s Suitehearts” hasn’t unleashed some nodal twitter (“What a Catch, Donnie” hasn’t made me believe again), then there’s no place for me here. I’m quickly, soundly, filled with sadness.