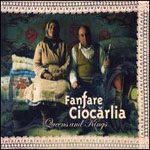 I first heard Fanfare Ciocărlia on their blistering Radio Pascani (1998). I bought it on a whim after reading Mr. Bungle’s Trey Spruance praise the Gypsy horn ensemble as (the web page is now down, so paraphrasing) “faster than Norwegian speed metal.” I haven’t really kept up with them since; that album was a monstrous curiosity that I treasured but I wasn’t sure I needed additional albums of 170-200+ bpm Romanian folk tunes played by a twelve-piece gypsy ensemble. Practicality, right?

It seems, however, that the group has calmed down in their continued efforts to unite and promote Roma culture around the world. Queens and Kings is far more.well, it’s not really “traditional,” and the playing is still complex as fuck, but the album is far more composed, eschewing breakneck rave-outs in favor of considered composition that emphasizes just how tight this band is. Because even though it sounds a little afternoon tea light at points, there are still moments of incredibly, incredibly difficult music, and the proficiency of the band allows them to turn on dimes lodged between the calculus curves of the music instead of rough housing their way right through them.

The concept for the album is a transnational approach to Roma music; the band gets guest vocalists from all over Europe to sing on many of the tracks. The vocals do tend to make this music more accessible, but what’s nice is that many of the vocals themselves are somewhat difficult experiments. “Duj Duj,” for example, is a duet between Mitsou and Florentina Sandu; one wails crazily over the thick tones of the other, making what might be a classic hum drum “world music” bin contribution into a surprising treat. “Kan Marau La” spins the other direction; a groping horn barrage that features wild high passages over an undulating baritone bed. Those horn melodies are the signature sound here; the vocalists sing between these phrasings as a slight relief from their battering calls. On more mellow tracks, like “Cuando Tu Volveras,” the guests take precedence for short bits, the horn players bleeping in the creases of acoustic guitar and drums, before the song follows Fanfare Ciocărlia on beautiful composed excursions that function like a guitar solo.

The album features production that dwarfs the dull thud of Radio Pascani; the stereo spectrum features horns everywhere, and the harmonies are clearly discernable throughout. The fastidious recording tends to dilute some of the rampant spontaneity that was a trademark of their earliest work; at the same time, hearing the way this band interacts (and all the insane little solo bits they throw in between the slightest breaks in their already technically insane riffage) is aweing.

But so here’s a band that got popular for a gimmick of speed. As they got more popular, it was probably inevitable that they would temper that speed in favor of sound. And probably even more inevitable that four albums later they’d end with this, which sounds like something your hipster uncle would play at a barbecue. Which is my way of saying that this album isn’t great, but it’s a great band making this album, and everybody who thinks Beirut is crazysexycool: this is the real shit. Now if only he could make an album with these guys as his horn section.