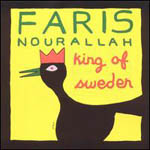 How many licks does it take to get to the center of a melancholy pop? It takes Faris Nourallah about ten seconds to get there: “Sometimes, I wish I could go back / Relive my life and do things over / But you know I can’t.”

I could mention the enveloping vocals and cynical humor, but if we were to go straight to the center of this album review, I would say, “On his third solo album, Nourallah sounds like a moderately depressed John Vanderslice.” There’s more to it than that, of course, but Nourallah’s King Of Sweden comes from the same school of high-maintenance studio obsession, front-and-center melodies, and melodramatic quirk.

Nourallah recorded this album at home (much like every single album I review), but thanks to his do-everything work ethic, it’s impossible to tell. Everything is sharp, focused, and precise, and the only sonic issue with most of the songs is that they're frustratingly short. “Obfuscation” starts out upbeat enough, with the kind of strummy guitar and jovial hook that used to be found on early Barenaked Ladies albums, but cuts out right after the second chorus. The preceding “Hit Me Again” is only a segue, but with its hard rock pastiche, it’s distinctive enough to make one wonder why Nourallah didn’t write the rest of it. The closest approximation is the Sonic Nurse texture of “Far From The Sun,” which moves with a suitably heavy dinosaur-plod.

At least he wastes no time in getting to the choruses. King Of Sweden is full of lilting hooks, from the string-driven twee of “Disenfranchised” to the trumpet thrusts on “Guiding Light.” “I’m Falling” updates Disintegration-era Cure with flowing synthesizers and surprisingly effective canned handclaps. The album’s best song is the only one Nourallah doesn’t perform all by his lonesome; on “I Run Faster Than You Can,” he’s joined by his brothers, and the result is the most exuberant piece on the record. Singing about a playground contest provides some sunshine for the morose songwriter, who follows it with “Life’s A Bitch.” Cavernous drums and low, moaning vocals open up like a gaping mouth, from which Nourallah sings, “Life’s a bitch, and then you die.”

Somewhere amid the impending doom of “Life’s A Bitch” is a sleigh bell, an ironic nod to holiday cheer or, alternatively, a genuine reminder of optimism. By the time Nourallah starts singing a delicate piano ballad about tattooing his woman, we start to wonder. Is it all just a big joke after all? The world may never know, but King Of Sweden is rife with enough dark humor and great choruses to get you well on your way to that tootsie roll center.