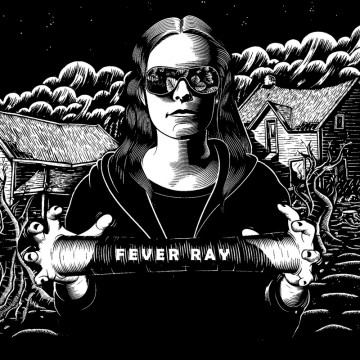 We might look on childhood—and likewise the art that embraces it—as irreverent or cute or regressive but it’s unlikely that children themselves can ever relate to these concepts even in their purest form. Check out Karin Dreijer Andersson in the video for “When I Grow Up”: standing on the diving board of a swimming pool in post-apocalyptic rags, war paint and eyes drawn on her palms in an odd juxtaposition of Andersson’s intense tribal stare with a rather banal suburban environment. But childhood embraces the transformation of the mundane into an epic struggle of survival: in the same track she sings about drawing a “funny man with dog eyes and a hanging tongue” and doesn’t even remotely sound like Animal Collective when she does it.

I experienced my own transformation over the course of listening to Silent Shout (2006) and I doubt I’m the only one: somehow it went from being a fun but one-trick dance record to a massive synth-pop masterpiece that sucked all of its well-worn elements into a black hole that made any comparisons seem trivial. A “monochromatic rainbow” as our house MD Alan Baban eloquently put it. I doubt the same questions regarding integrity or craft will be applied to Fever Ray, Andersson’s solo project and close enough in sound to be an informal follow-up to Silent Shout. Perhaps because most people have had the time to absorb and move beyond the exaggerated reactions to its initial impact but also because, like most solo records, Fever Ray is a more refined songwriterly affair, even if the drama and icy synths (is there really any other descriptor for what they sound like?) have hardly been reduced.

But Andersson, writing most of these songs after the birth of her second child, plays with gender dynamics as much as childhood themes. It was easy to forget that she presumably delivered most of the vocals herself with the Knife, her brother Olof contributing mostly on the programming and beats. On Fever Ray she stands alone and the androgyny of her vocal manipulations is apparent from the outset, her voice brought down to a deep baritone on “If I Had a Heart” as she sings “this will never end ‘cause I want more” (again playing into the sometimes diabolical mindset of a child). Considering the Knife boycotted the Swedish music awards, sending friends in gorilla masks to protest the inequal gender dynamics in popular Swedish music—perhaps a shout-out to the feminist performance art group Gorilla Girls—the implications for gender dynamics are probably well understood by Andersson.

But their reasons for the boycott went beyond just gender, claiming they were “tired of the focus on people instead of music in the media”. Their identity-obliterating (not to mention seizure-inducing) live shows only confirm this. The difference with Fever Ray is the personal element, the self-conscious “solo album” format, which makes the album a strange meditation on the fragmented self. The sleeplessness associated with motherhood, not to mention the degree to which protective instincts overwhelm conscious decision-making, result in an album whose narrator seems to be constantly slipping in and out of control; trying to let the TV and radio lull her to sleep on “Concrete Walls” or longing for a zen-like path on “Keep the Streets Empty for Me.”

Occasionally the somnambulant qualities of the album seem to put the songs on autopilot: “Now’s the Only Time I Know” and “I’m Not Done” could use more than Andersson’s long, monotone vocal delivery, even if the production behind them is still interesting. Fever Ray is best when she plays around with the vocal effects within the same song, as on “Dry & Dusty” when she seems to be doing a duet with a raspy, weathered version of herself—which somehow sounds entirely natural despite being heavily processed.

Of course the biggest complaint anyone will lodge against Fever Ray is that there’s none of the pounding house beats that characterized most of Silent Shout; there are a lot of tracks that take the tone and pace of “The Captain” and “From Off to On” and nothing that sounds like “We Share Our Mother’s Health.” That element was what lifted Silent Shout to one of the decade’s best electronic records: somehow both unrelenting in atmosphere but also with a bracing intensity, not to mention their often unacknowledged lyrical brilliance. In lieu of an actual follow-up we get something that manages to make good on two of those three elements. I’ll take it.