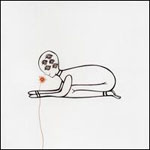 I was standing on the shore of the Interweb, intending to do a bit of background research on a band called Figurines. Some of you might remember they had a decent album a few years back—Shake a Mountain—with some nifty Sonic Youth-ish guitar riffage couched inside more direct pop song structures. Since this new album is so good that it retroactively makes that description pithy, I thought it was time to reacquaint myself with our Danish friends. I dropped their bandname’s stone into the lake of my search engine and, in a hypersecond, the calm Google surface erupted in waves and torrents of 25,100,000 pages that all said variations on the same thing: “Skeleton has awesome hooks!”

It’s true that something is awesome in the state of Denmark, so let’s get this out of the way: Figurines are a great indie-rock band that write and perform phenomenal, catchy tunes with great hooks. And fine, but aren’t “hooks” kind of the point? I mean, isn’t that basically what indie-rock bands are supposed to do? Most of the analysis of this album doesn’t seem to move beyond a basic claim which, to me, seems a bit superficial. Being at the top of the bell curve isn’t actually the most exalted position, if you know what I mean.

Especially because Skeleton is so far to the right of that pinnacle of adequacy. I mean, the band isn’t all smarty-pants, redefining the language of indie-rock. What they are, though, is conversant enough in its language that, even in creating songs whose surface is unrepentantly popular, straightforward, or whatever other slug you want to lob at them, they possess the ability to play around inside those parameters, creating an album of songs with depth, surprise, and worth close, repeated listens—and one that can dodge any attempt to pigeonhole their sound.

The solemn, slow piano that opens “Race You” is an immediate clue that this band is interested in two things: 1) how to circumvent our expectations and 2) how to craft an album. The song’s a total grift, but you won’t mind falling for it when the power chords of “The Wonder” yelp out of its meandering end. The affect isn’t simply to contrast “slow” and “fast” songs, but to reframe the way the energy of different tempos can work together (or react off one another) to create narratives that play across songs. Because, see, when “All Night” ups the ante even more, adding tense crunch strumming and Kristian Volden’s creative drumming to the menu, the tension between fast and slow, between heavy and soft; these become motifs and tropes that play out as the album procedes. Helped along by Christian Hjelm’s first person lyrics—it’s unclear whether or not the narrative voice is the same character re-articulating his doubts and feelings in different contexts, or whether these are all different people feeling similar emotions, but the net result is the same—the album pushes these moments of character at us through a variety of musical genres, but the emphasis on overall structure ties them into a coherent statement.

Beyond making ballads and ball-busting meaningful, Figurines have a lot of fun in each song. In the breakdown on “The Wonder,” the guitar starts with simple descending chord riffs, but by the end of the passage, the guitars are breaking out of that structure, seemingly playing whatever chord comes to mind, slurring their riffs, all without breaking pace. On single “Silver Ponds,” all acoustic beauty and chorused leads, Hjelms howls a series of memorable melodies, adopting his most pained vocal for one of the album’s most pleasant songs. The lazy garage band antics of “I Remember” (featuring, of course, phrase-ending handclaps) get flipped upside down when the chorus resembles a schoolyard-chant, when the bridge morphs in a Beach Boys surf pastiche, and when towards the end, a swooping guitar lead breaks re-conceptualizes the melody in swoops and bends.

“Back In The Day” is an unplugged masterpiece, perfectly encapsulating the sound and tone of Neil Young without sounding (too much) like him. “Ambush” runs its blues-riff under soaring chorus harmonies, distortion, fuzz, and a cooed “ooh ooh” that rounds off phrases, but there it is, sometimes stripped all the way down to Andreas Toft’s bass, still working away matter what the band throws at it. “Other Plans,” a highlight, is a straight-ahead rawk song which contains a bridge that flirts with orchestral ideas, a Shangri-la in an otherwise mono-tonal piece. Claus Johansen dofts his guitar for a banjo on “Ghost Towns,” a lovely piece as inspired as the stylized tracks off Exile on Mainstreet. Over top, Hjelm’s sings “I need someone / You need someone / to love tonight / Who needs someone / to pick a fight?” again staging pitched fights between emotional extremes.

“Release Me On The Floor” melds all of these techniques into the album’s beautiful closer. Sweet picked acoustic lines echo Hjelm’s melody as horn-synths enter the mix; the chorus includes a faint and simple guitar pattern that gets reframed, distorted, and cast as the main melody of the instrumental coda. Falsetto vocals sweep over the barrage of noise; Hjelm’s insistence that “first of all [he] owe[s] you / for what [he] never told you” reflects the inverted process of the album—what is first is last, and all emotional states are of equal valence. It’s such a simple idea, but it’s the glue that holds Skeleton—that frail frame upon which we rest—together.

So, yeah, Figurines are a great indie-rock band, but to reduce them to that moniker ignores why they’re different, which is exactly why we should care. They’re not filling this thing out as a paint-by-numbers; they’ve obviously thought about this album extensively, working to make the tracks work together, paying attention to those critical details that give an album replay value, honing their songwriting, finding ways to exercise technical virtuosity without needing to shove that skill in our faces, and having fun without sacrificing gravity when needed. Forget the hype now; when they made this last summer, without hype, without de-habilitating expectation, they may just have created the finest indie-rock album of the year.