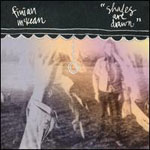 Certainly, albums by a single musician, who records every track and twists every knob that goes into his efforts, are impressive on a scale of ambition alone. And so give initiative points to Finian McKean, aka Finn Moore Gerety, for hacking it out and actually producing a full album from a place of depression and isolation, rather than merely wallowing in it.

Except…not to be a cynic, but if the info I was given is correct, and Finian McKean had a “pop hangover,” and these songs come from a very private, desolate place...well, this is still a pop album. And it’s melancholy, for sure, but in a “nothing really matters anymore” (from “Nuthin’ Matters”) kind of way. Bursts of personality and anxious production flit across this landscape, but Shades are Drawn turns equally, and awkwardly, to accessible, non-descript roots-rock pop.

At worst, then, the album droops to middling 4/4 plods like “Small Request,” which layers tepid lyrics (“I remember the way she looked at me / It had to be love / But love’s not enough”) on top of harmless acoustic and electric guitar figures, weak bass, and bland percussion. The dismissive “Little Beggar” treats a hopeful lover like crap (she’s the “little beggar”) while doing little more than buffering a so-so acoustic melody with a superfluous reverbed electric guitar progression.

But when McKean actually transmutes the idiosyncrasy of his recording situation (a room with tin ceilings and a green marble fireplace, apparently) into his production values and songwriting, interesting ideas rupture pop placidity, and yield a bit of unique quality. Sometimes the attempt is half-hearted; the opening title track’s titillating lo-fi barbed wire reverb looks to lead to singular music inspiration, but winds up echoing against a simple melody and average blues-rock. The dusty piano of “Oh My Heart is Heavy” suggests any number of interesting direction, but never quite lightens up and eventually devolves into drudgery. “Where No One Wants Me,” however, nails individual voice and instrumentation, fostering a sense of anxiety behind a skeletal rhythm with a wraith of background synthetic noise. The song not only employs a pleasantly surprising wah-wah synth figure later on, but bursts through a dynamic shift into a chorded electric bounce, eventually loosening its internal controls to finish in satisfyingly tattered fashion.

It’s a moment of inspiration that Gerety has trouble replicating, however. His lyrics rarely develop into poetic tropes that haven’t already been ground into the cliché graveyard by a thousand down-on-their-luck minstrels before. The man can write a melody, but not many of them stick. His traditionalism isn’t itself a handicap, but its near-intersection with triteness is.

So while “potential” is the gateway word to a back-handed compliment, it is, fortunately and unfortunately, the best that Shades are Drawn has to offer. Gerety has his basics down pat; fully transcending them will hopefully be the next logical step from a transitional album that pokes a hesitant toe or two beyond them.