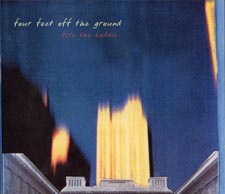 Four Feet Off the Ground

Founded in Louisville, Kentucky in 2001, Fire the Saddle recently released their second record, Four Feet Off the Ground, coming just two years after their now impossible to find Sometimes It Isn't the Horse (2002). From the trampled depths of the traditional south, their music sounds like not just authentic, but sincere country culture combined with classic roots rock and a heavy does of modern bluegrass, a genre gaining more attention from the unlikeliest of crowds in recent years.

But this certainly isn't a send-off from the O Brother soundtrack or a juvenile attempt to cop a familiar style for an unknowing audience; the group's six members---singer/guitarist Tory Gail Fisher, bassist Rob Collier, drummer Jason Bemis Lawrence, as well multi-instrumentalists Christopher Guetig and Mike Sullivan---have crafted a sophomore record that not only fulfils their debut's promise, but brings them all the more closer to Louisville's musical elite. Not surprisingly, My Morning Jacket's Jim James is a fan, though his "Sounds good" quote in the group's press release sounds more like an off-the-cuff comment to the singer after a show than a fevered recommendation.

Starting off the collection is an upbeat bluegrass tune, “Too Cold to Dance.” The band seems to be eager to impress, though with its pure raw thumping, fantastic instrumentation and enough subtle background additions to tie in its memorable melody, it undoubtedly comes across a confident opener. The darkly romantic "Singing My Song" marks a quick change in style, which isn't rare on the record, and resides in a much more melancholy world than "Dance." It's one of the several tracks where the group's individual talents---especially Tory Fisher's feverish lead vocals and the instrumental prowess/backing vocals of Mick Sullivan---are very distinct but work together wonderfully as a solid whole.

“High Roller" comes next, and is unfortunately one of the few tracks where the group sounds a little forced, and it doesn't work nearly as well. There's a tightness in the writing, giving the impression that though given a fairly prominent place on the album, it's one of their less inspired compositions. Still, the song's infectious rhythm and simple lyrics (“Make it better / Couldn’t get any worse / Say that you love me / But maybe you’re just a curse") are saving factors. With the following track, "Faith in Me," the band leans slightly into big band sound. Frenetic and quick, the beats are packed together perfectly, and the spaces of empty sound filled with joyous bluegrass instrumentation. A wild cabaret sound is the lures in the background, while Fisher and Sullivan continue to maintain a perfect harmonic balance.

"Silk And Oil" is probably my personal favorite, and it's not hard to hear why; not only wonderfully performed and structured, its lyrics ("You should come out, a suns coming up / If I don’t make it home my love”) are also beautiful, and the arrangement is wonderfully layered---a clear and astounding blend of the group's arsenal, thrown right in front of you, snatching your attention and holding it closely. On the flipside, there's "On a Summer's Day”---the kind of disappointment that keeps you from, based on the gems packed into the record's first six tracks, throwing yourself to the feet of the band. The writing, like "High Roller," feels lazy and rushed, and though the use of the violins in its breaks is a highlight, it's, compared to what surrounds it, still a piece of filler. Thankfully, "Going Away" finds the group returning to a more considered and pleasing sound and progression, helping to make up for "Summer's" misstep not nearly as detrimental.

The album rarely disappoints as much again, but continues to be all over the map, eventually revealing far more sides to their musical personality than most groups would even hint at, weaving together in a way that often works when it shouldn't. From warm and fuzzy to sleepless and heartsick, and even, in “Contact,” funny and (in the best possible way) cute, Four Feet Off the Ground is full of animated and shifting personalities.

The lyrics weaken just a bit as the album ends---see: “Go On,” and “In the Dark”---but the music itself remains simple but acutely effective as possible, and manages to hold attention to the very last second of melancholy closer, " Nothing Wakes Me Up.” It's a beautiful ending to an album that is both warm and romantic, fun and smart. A little weird and slightly sad in places, sure, but I guess that’s the same with anyone that doesn't live their lives continually changing masks. It's a reminder that Fire the Saddle are, at their very core, honest and sincere, and its a trait that often makes their music far more compelling than thousands of sound-alikes that came before and will probably come after. Even if their sophomore effort isn't as solid as I would have hoped, it moves me in ways that few other records in 2004 have, and fills a void that reaches far past their local Louisville scene that many will, and should, embrace.