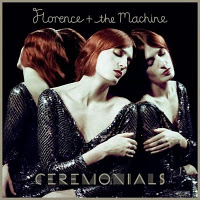 Florence and the Machine

Florence Welch is not about to settle for one-hit wonderdom. But if she was gonna have one song to remember her by, she could have done a lot worse than “Dog Days Are Over.” Initially released in 2009, it didn’t make a semblance of a dent on US shores until 2010, in which it became downright ubiquitous. A defiantly strident, if somewhat off-kilter, piece of British diva pop (Adele meets George R. R. Martin maybe?), it sounded absolutely like nothing else on pop radio at the time. I’ll assume it was featured on Glee too at some point, but to confirm this would require watching Glee.

I’ll cop to never having listened to Lungs (2009), the Florence and the Machine debut from which “Dog Days” is taken. But on follow-up Ceremonials, Welch doesn’t so much double down on “Dog Days”’ sound as blast it through the fucking ceiling of whatever Gothic cathedral she must have recorded each of these songs in. If there’s any justice, lead single “Shake it Out” will be an ever bigger smash; it ratchets up “Dog Days”’ energy to messianic levels, featuring an even catchier, gospel-laden chorus. Chris Martin would absolutely kill for a throwaway couplet like “And I am through with my restless heart / So tonight I’m gonna cut it out and then restart”; in terms of sheer arena-uplift, “Shake it Out” handily bests anything on Mylo Xyloto (2011). Sincerely, no small feat that.

The song might actually suffer commercially for being too rich for US mainstream consumption. In fact, last I checked, “Shake it Out” was still buried far below Gym Class Heroes on the VH1 Top Twenty Countdown. American pop programmers love their dross, so it’s no surprise they’re a bit confused as to where a pop song resembling the best bits of Arcade Fire’s Neon Bible (2007) fits amongst the sorry likes of Christina Perri, or even Adele. There are no DJs capable of reducing “Shake it Out” to a palatable dance mix.

Welch has an incredible set of pipes, is prone to wearing ridiculous white gowns on stage, and doesn’t really do subtlety: many detractors refer to her as indie’s answer to Celine Dion. Again, no surprise. Ceremonials essentially serves as an exercise in seeing exactly how many different genres Florence can tackle with that monster voice, so long as her MO remains all anthems, all the time. She shuffles through mystic soul that out-Toris Tori Amos (“What the Water Gave Me”), spotlight balladry (“Never Let Me Go”), cheeky mid-‘90s Brit pop Jarvis Cocker could appreciate (“Breaking Down”), and on “Lover to Lover,” a delicious Motown strut which could pass as a primo Annie Lennox track. Dion, Adele, Kate Bush: of all the comparisons made of Florence Welch, attempting to pitch her into a digestible niche, she, actually, sonically hews closer to Lennox than any of them. Think of Ceremonials as a 21st century update on the latter’s Diva (1992), a Grammy-nominated slab of sophisticated soul.

The Machine aren’t fucking around here. Nobody puts out an album like Ceremonials without anticipating playing it inside of football stadiums and/or ornate religious sanctums. Producer Paul Epworth is miles away from being best known as the Bloc Party über-remixer, and he imbues these songs with insistent piano and church organ, pounding kettle drums, harps, of course—and a guitarist? Who cares. There’s also generous amounts of echo, and an oft-used multi-tracking vocal effect where a multitude of Florences sing a chorus line while their creator wails the lead vocal on top. It’s cool.

If you’d think that listening to twelve songs and nearly one hour’s worth of baroque power pop sounds a touch exhausting, well…if there’s one flaw to Ceremonials, it’s that Welch never cares to dial it down, even a smidge. It’s like she can’t even recognize that dynamism can make for, at the least, a compelling full-length. The back half of the album suffers especially from this redundancy: “Heartlines” and “Spectrum” are both killer choruses in want of actual songs, and the one time Florence does elect to slow things down on “Seven Devils,” it makes for unquestionably Ceremonials‘ weakest track, a murky dirge not nearly as demonic as she thinks it is. Let’s leave the eerie shit to Carey Mercer: a nine-song record would have been just right; twelve is overkill.

But Florence and the Machine have plenty of albums ahead of them to learn how to successfully operate in a lower gear. It’s easy to forget Welch is only 25, after all, though I’m already totally looking forward to the British Christmas Special Welch has earned the right to host. Ceremonials is a sumptuously produced album of mystic pop anthems. It’s pretty much as good as it gets for the mainstream in 2011. And for once I have my heart set on something sweeping the Grammys.