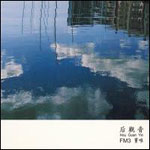 Let’s start here: if you don’t already have a Buddha Machine (the object) get one, because _Buddha Machine (the album) is phenomenal, even despite the fact that the relative success of the machine is probably, at least in part, based on the novel concept. A little box that can play nine loops (each one for as long as the batteries of the machine might last), the behind-the-curve 2006 hullabaloo surrounding the 2005 object made FM3 a household name (well, a geeky household name).

Okay, but that’s Eno’s wet dream; this is a boring old 20th century Compact Disc-format album. Well, “boring” only because of the format, since while the tracks of Hou Guan Yin may not be able to spiral into Buddha Machine infinity, FM3 and guest Dou Wei are spinning into another orbit entirely. It’s kind of like chess: the FM3 duo (Zhang Jian and Christiaan Virant) lull you in early on, playing with foreboding drone patterns and bailing water from leaky hulls, but eventually drummer Dou Wei grabs fistfuls of FM3’s sonic tapestries and rips them to shreds. Well, sort of, I guess, because there’s a lot of castleling going on. This album is about building bulwarks, and it’s not quite as simple as quiet drones and loud drumming, in part because Jian and Virant are playing keyboards and guitars both in the lap top and more traditional senses, and in part because this band orientation of sounds seems to rephrase the ambient textures FM3 excel at as forays into the land of Sunburned Hand of the Man and Wooden Wand. It works, I think, because the sense of restraint the duo has gained as ambient musicians makes this trio’s (well, quartet really, since noise master Yan Jun is creeping around backstage) brand of freak explorations far stronger—or at least more consistent—than those two bands.

But what is really striking about this album is how readily it bridges the gap between early seventies prog (like, the experimental kind, and not the more popular formalized version of Yes and ELO) and present day electronic music. Xhol Caravan, Agitation Free, Area, Tangerine Dream, Cluster, Battiato—their fingerprints are all over this thing, which isn’t entirely shocking, since some of the roots of electronic music exist in that cluster anyway, but insofar as the intent is to draw the soothing and sore together, I haven’t heard an album that is so evocative of that nexus of noise in a while. Like those bands, FM3 understand that vibrant tremors exist in all sorts of contexts, groupings, and tempos, and that an album doesn’t have to be a collection of ideas, but rather it can be the idea, and that its parts can simply explain the narrative through moods. Hou Guan Yin swells and breaks, and from the cover to the clanging percussion employed by Dou Wei it’s an incredibly watery album. It poles between straightforward post-rock patterns (without the expected eruptions) and obtuse sound experiments, but the focus on overall tone ties these excursions together. Which is exactly how something like Xhol Caravan’s Motherfuckers Ghmb (1972) worked—bits and pieces carefully folded into an overall piece, so that while there are tracks, those tracks are more like movements in one coherent idea. Which—and, I mean, the lack of titles for most of the tracks here makes it obvious—is exactly what’s going on here.

Which makes it hard to talk about individual tracks, since most of the time we’re simply fading in and out between specific ideas. Often, the basic FM3 format stays fairly intact, throwing a blushing powder of opaque sound over the palette and then playing with the results. Other tracks swarm around specific movement, lobbing Dou Wei’s percussion through the inertia. And when all three connect, when the group is done foraging for ambient textures and new overlaps in avant-garde music, they let out the steam in grand style (on tracks 6 and 10, for example), and the result is beautiful. 10 especially makes the noodling explorations of Sunburned and Wooden Wand look amateurish by comparison, simultaneously funky and completely off the map.

This isn’t an album you’d want to cherry pick from—it’s a coherent statement, and some of the experiments fall a bit flat out of context—but the overall quality maintains FM3’s status as one of the most important avant-garde groups we have working today, both for their fantastic compositional skills and their commitment to constant experimentation. Hell, Eno bought like eight of those Buddha Machines, and maybe we can hope that the act is some sort of prophecy. Maybe in a few years FM3 will be invited to produce all sorts of indie albums, and we’ll get some _Lamb Lies Down on Broadway_s (1974) and _Remain in the Light_s (1980) for our generation. Or maybe FM3 will just continue on knocking out some of the greatest experimental music ever. I know I’ll be happy either way.