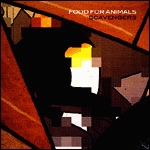 Politics are en vogue again. Yes, people are finally getting massively pissed off about a government that would rather drop bombs disguised as Pop Tarts on children in third world countries than give their own poor citizens health insurance (true story!), and they've got their choice of music to soundtrack their discontent. Depending on who you ask, hip-hop has always been the most successful genre at focusing and expressing angry politics in the music world; from Public Enemy's Nation of Millions (1988) to Dead Prez' Let's Get Free (2000) to El-P's Fantastic Damage (2002), political hip-hop always seems more relevant and vital, at least to these ears (especially compared to the endless outpouring of punk compilations).

Food for Animals continue in that tradition on their painfully short and piercingly aggressive Scavengers. Speeding through ten tracks in just over 20 minutes, the CD is short on running time, while being full of ideas, explosive energy and deconstructed hip-hop. Don't mistake the brevity of the album for a lack of ambition, though; while at first the album would seem a weird choice for hot Canadian label Upper Class, the group does seem to share an affinity for high-end lo-fi production, along with labelmates Cansecos and the Russian Futurists. Ricky Rabbit mixes chopped up bits from a schizophrenic grab bag of early nineties Astralwerks CDs and the illest underground beats, his production on Scavengers amplifies and guides the anger of Vulture Voltair. Voltair sounds like a mix of the more-yell-than-flow of Chuck D and strangely, the Beastie Boys.

The Washington DC area duo have obviously been paying attention to local politics as well as the classic '90s hip-hop record by Nas and Wu-Tang, amongst others. Vulture Voltaire throws in as many pop cultural references ("I'll bust a mean Jackson Pollock in your drawers") as political ("I got misplaced anger don't push/ And when I say 'fuck you,' I really mean 'Fuck Bush'") on the first true track, "Elephants." "Brand New" follows with a stuttering dirty drum loop in the background and Voltaire channeling Ad Rock in the fore. Voltaire is obsessed with people who claim power for themselves and are overbearing and aggressive ("Muckamucks," he calls them). He's not quite as adept at social commentary as Dead Prez or Aesop Rock and were it not for Ricky Rabbit's dirty jabbery clang-o-beats, it could get old.

Luckily Ricky keeps things from getting stale. This rascally Rabbit's filthy Martian instrumental pieces have an almost industrial heaviness and hold more intrigue than Voltaire's perturbed rants, though I wish they'd been extended and fleshed out a little more. Like a mad Gargamel, Ricky Rabbit likes to screw with hip-hop's DNA, removing such important aspects as rhythm and beats and replacing them with trashy cacophony of noise: clangs, fuzz and sharp edges. If this truly is food for animals, they're some fucked up animals.

On the title track, Ricky's percussions hit like shotgun blasts that dissipate like so much electric vapor in the distance. Thankfully, Voltaire has come back from his lyrical wanderings and is up to the task to match his partner. To be fair to Voltaire, he's basically free-styling at points over a fractured dronescape of sharp metal, knife beats and hollow buildings. Sometimes it works fantasically (as on "Cut and Paste," "Elephants," "Muckrakers" and "Scavengers"); sometimes it seems both Rabbit and Vulture are sad, lost animals too wrapped up in their own aggressive sound-making to hear one another---which is, really, about as accurate a picture of the political landscape as you're going to get.

Food for Animals make the perfect music for driving to that weekend WTO protest rally in a big van full of angry students full of unfocused bitterness towards an alien landscape of faceless authority, road kill and scrap metal. They are full of a political rage that they cannot quite put into words.