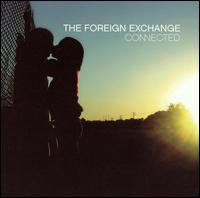 When “Let’s Move” pushes the sample that sounds like forest music at the beginning of a Disney fable, and the keyboards emulate the melody, and the white fairies turn Nubian and BGV on the hook, the viewer smiles and anticipates the evil stepmother’s attempt to squelch the sunshine. But in the Atlantic distance that separates Little Brother emcee Phonte and Dutch producer Nicolay, there’s only an amicable international partnership, and their contributions to each other have all the gusto and friction of pen pals who have never met. The evil stepmother never shows, and the utopia of Connected continues for its Disney movie running time without a hint of conflict or heat or disturbance.

The Postal Service employed a similar sort of instant message-in-a-bottle methodology; presciently, the separation that stultified Gibbard’s and Tamborello’s strengths has a lesser but still recognizable effect on the Foreign Exchange. Technically, Phonte and Nicolay may be as connected as the album’s title suggests, but their finalized draft of ones and zeroes feels infected by the most common of digitally transmitted diseases: boredom.

“Von Sees” begins all mayonnaise mellow keyboards, a lag soon joined by bass and keyboards too slothful to pick up the slack. Phonte casually raps an introduction and some shout-outs; he and Nicolay are making supermarket hip-hop. “Raw Lifes” offers an immediate modicum of redemption, the bass clicking just so with the key riff, the drums still dragging behind but bringing up the rear, and at 2:35 the music builds a bridge traversed by telephoned vocals until the bumping verse breaks back in. Nicolay’s music reverts to doldrums on “Hustle Hustle,” but the emcees rev their tongues and let loose quickly on their verses, smoking the track’s air with exhaust while the hook’s horns trump. Despite the enervated bunny rabbit nature of Connected, there still lingers a solid sense of the talents at hand bouncing off each other on a quest to find kinetics that can span the ocean.

The effort to push the song particles into collision is nearly futile, though, due to the chill of the album's circumstances and the coyness of its artistic goals. With all the craftsmanship and skill applied for the sake of creating something so innocuous, Connected begs to be the best music that an impotent man can listen to when he cuddles with girls softer than cupcakes. After the beautiful bass line slow grind of “Nic’s Groove,” the castrated “Be Alright” flips the lens to soft-focus and makes Diddyesque rap & blues. “Sincere” and “Brave New World” teeter on the edge of insipid. “The Answer," “Happiness” and “All That You Are” all drive in the right direction, demonstrating the ample promise of Foreign Exchange to create strong grooves with feeling and class, but no song quite reaches that warm final destination where every listen is like a shot of bourbon. The arrangements lack verve and volume in their reliance on slow synthetics and tepid drums; vocals blunted of intensity deliver ambitionless lyrics.

The Foreign Exchange seem willing and able to cook up classic soul and R&B for the hip-hop era, but the great Marvin Gaye and Al Green and Sam Cooke records reeked of desire. With monitor light seeping into their faces, Phonte and Nicolay slouch in their chairs, non-erect. The hook of “Come Around” assures that the ladies need have no fear, but that's not just because of some gold halo of intentions; The Foreign Exchange is sterile.