Other Records by French Quarter 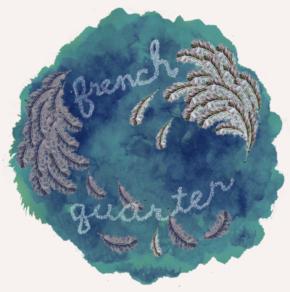 I can’t believe I found this first. Not Pitchfork, not Stereogum, not even TinyMixTapes has a write-up on French Quarter. For perhaps the first time, I can’t stitch an opinion together from the detritus of online criticism, trying to pull the sutures tightly enough on my Frankenstein’s-monster of a review so as not to leave a scar. This time I have no guide but the drip of my serotonin and the ball in my throat.

It’s a strange feeling to have any bearing at all on the reception of a piece of music. The desire to pass judgment is a guilty impulse and as any visitor to my inbox can attest, listeners are as likely to overturn my verdicts as not. But usually I can relax in knowing my review is just one of many nestled in the Internet’s general critical consciousness—one tiny voice whose tendency to stammer is covered up in the general melee. But there’s no melee surrounding French Quarter. A conspicuous halo of silence encircles the gorgeous twining acoustics, and so I guess it’s up to me to stammer out my own lonely verdict on Stephen Steinbrink/French Quarter’s budding career. This is this: The drip is pretty fast. The ball is pretty big. I mean, this album is really good.

I keep trying to break through the songs’ outer shells to find a spastic core of teenage angst. At 19, Steinbrink must have recently graduated from high school, and so I have to assume somewhere in this self-titled release he’s going to hesitate, betray some awkward post-pubescent confusion, and show himself for what he is: a newborn blinking in the sun. But the entire album is steadily crafted, teasing out emotions with little more than a guitar and a nasal croon, and I’m left wondering what happened to the late-teenage identity crisis. Where are the awkward synthesizers, the humiliating lyrics, the crotch-grabbing overcompensations? French Quarter sounds completely sure of itself.

Even the contradictions on this album come across as entirely self-aware. Steinbrink is perfectly content to be a folk musician who will base an entire song around a drumbeat (“Before the Sun”), a sad guy writing happy songs (“Build Fires”) and a happy guy writing sad ones (“Snake Fantastic”). As he himself sings, “I won’t take no sides / Never argue or abide / Or vacillate and compromise / No, I won’t take no sides.” (Bonus points for “vacillate.”) And I don’t want to take sides either. I don’t want to pit the critic against the music lover. It just doesn’t work when I’m dealing with something so emotionally vulnerable. I don’t want to just peer at the threads of sentiment through a microscope and my self-protective shell of irony, trying to think of jokes. Instead, I want to wrap it around me. I want to wear these songs. I choose to see each inconsistency as improperly purled rib on a home-knit scarf.

Yeah, that’s all very nice, the critic responds, but what about the actual sounds these metaphor-inducing sincerities come wrapped in? What’s new here? Not much, it’s true. But neither is there a sense of grasping at newness. It’s a relief not to be blinded by the sparkle of production, and to simply accept the drafty-room acoustics and dusty guitars. In the place of aural bling, there are spare moments of innovation, inadvertent field recordings, and a snare drum that sounds like a wet towel hitting the locker room floor. And when Steinbrink’s voice harmonizes with itself to create eerie intervals that make these songs something more than merely pretty, I just want to kidnap Chris Walla and lock him in my basement so he can’t ever get his hands on French Quarter.

The only real disappointment this album brings is the regret that at 24 years of age, I’m too old to be precocious. And as a critic, I’m too analytical to really touch what makes this album so good. French Quarter is the soundtrack to my own irrelevance, and I can’t even feel bad about it. Keep doing your thing, Stephen, and I’ll be here. Fading into the background.