1. Secret Walls
2. Keep Telling Everybody Lies
3. Do You Believe in Destiny?
4. Wash Over Us
5. Poison Wine 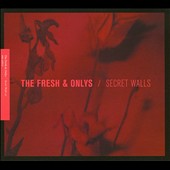 San Francisco’s the Fresh & Onlys sound instantly familiar. If they make the whole throwback thing work better than a good deal of their peers, it’s because theirs is clearly inspired by 1960s British Invasion, garage, and psychedelic rock, while mostly resembling pastiche: Rock ’n’ Roll Past seamless, pieced together impressionistically. Secret Walls, their latest EP, offers five tracks that feel like music from a dream: recognizable but otherworldly, blurred, and unreachable—no amount of scrutiny will bring it into focus. Secret Walls plays out like a lost record by a group of unknowns, recently unearthed from a dusty basement.

Secret Walls follows the band’s flurry of releases in the past few years, most recently 2010’s Play It Strange. And like the work that preceded it, this EP is finely wrought, accessible, and perfectly lovely to listen to. When I saw the band a few weeks ago, the crowd ranged in age and subculture, from hipsters to what we in Pittsburgh call “yinzers.” (Yinzers say “yinz” instead of “you guys,” wear Steelers sweatpants, and drink Turner’s Iced Tea straight from the carton. They also, apparently, listen to the Fresh & Onlys.) But it’s not just blank nostalgia that’s so appealing, it’s that particular hazy spell the band casts, like it’s in constant flux, unable to take form.

This makes them both easily lovable and frustratingly enigmatic. When I saw the Fresh & Onlys, with my eyes, I have little memory of what they looked like (there was a beard in there somewhere), what they said, how frontman Tim Cohen sang. It was a great set, equal parts cheerful and hypnotic, but this band is slippery like that. They cater to a diverse following and create a dynamic creative experience, and do it while remaining anonymous and unmemorable.

It’s fitting, then, that Secret Walls is full of echoing, spacious music, often about loneliness or longing or close to that. These five songs are cavernous, like AM radio; one feels like slow-dancing alone in an empty house. “Secret Walls” begins with a supremely claustrophobic vibe, but particularly pitch perfect is “Keep Telling Everybody Lies,” a haunting, shuffling tune that begins with Cohen’s ruminations on being “alone in the world.” He continues by assuring a fellow wanderer, “You’ll find a home…” and the moment is both scary and sexy (a la “Time of the Season”). Cohen and bandmate Heidi Alexander hit one last striking tone, exhaling spookily over the repeated chorus, “So why keep telling everybody lies?”

“Do You Believe in Destiny?” is similarly spellbinding. Cohen mutters something about marrying a millionaire and heading across the sea, “where life would be so lonely”; the guitars swoon and tremble at the slightest touch. With only two short verses, the song slowly unspools until there’s nothing left. The EP is rounded out with the slightly perkier “Wash Over Us” and then the fragmented “Poison Wine,” which sounds like a fussy and not-quite-at-home B-side. Turns out, it feels pretty good coming at the end of such a tense, creepy batch of songs. We can finally exhale, just a little bit.

The Fresh & Onlys have achieved something captivating with Secret Walls, conjuring up vast, mysterious spaces within economical songs, songs demanding repeating listens to decipher. The Fresh & Onlys may not be a band full of big personalities, but it’s certainly one with endless potential, both bending and beholden to an old sound adeptly enough to find something new.