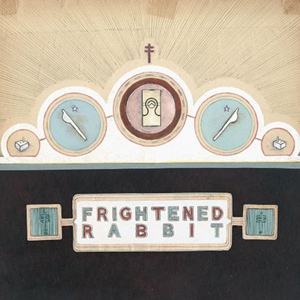 The Winter of Mixed Drinks

When I was a child they brought me up on this cogitative little power ballad called “One,” by this band with this guy in these shades with these eyes, and how old was I really but the truth is I didn’t feel young, and it didn’t feel messaged at all. It felt like a Man’s Song. You’re laughing. Which is the spirit, in a way. “Did I disappoint you / Or leave a bad taste in your mouth?” asked the man but a moment too late—my neurons already spitting past, leaping in contingent fire, to pleasure, To Peace!—his moves dripped thereto in mysterious ways. “One” might be universal but it’s also way less than that: it’s sex qua sex; it’s the architecture of a hand up your shirt; it’s ego as medicine, as means to an end. Forget, for a second, what it’s been annexed into: “We’re one / But we’re not the same” is a pretty genius lyric—not in spite of Bono’s narcissism, but because of it.

Frightened Rabbit’s Midnight Organ Fight, a winning record in every sense, ascended to its heights via this same devil’s bargain: Scott Hutchison’s catharsis from heartache by being, well, awesome at it. And much like Bono at his best, Hutchison pulled off his self-revelry for precisely this reason: that he wore it, not as genre (or even genre exercise), but as the believably, almost necessarily solipsistic pose of writing oneself through a breakup. As an offer it was hard to refuse, full of odder-than-odd quips, hissy put-downs, ineluctable sex with regrettable girls, anxiety that knew its purpose was to yield to temptation—all wrapped in enough melodic folk-rock to make your memory blush. “This is the last song I will write about you,” Hutchison promised on “I Feel Better,” and true or false it endured as the record’s operative resolution: to neither sink into nor rise above heartache, but to perfect it and move along.

The Winter of Mixed Drinks is a minor disappointment, then, in that in wake (and perhaps as a result) of his heart’s subsequent rehab Hutchison’s songs can’t really sustain the weight-loss of their ego. It is a record that presents him as a man coming out from under: perhaps still in pieces, but at least picking them up. Opener “Things” has less a chorus than a mission statement: “I didn’t need these things / I didn’t need them, oh / The point was hard to pass / A mediocre past / So I shed my clothes, I shed my flesh / Down to the bone and burned the rest.” The record continues very much in this vein, returning throughout to the theme of abandonment-as-rebirth.

Gone though are Organ Fight‘s originary pleasures: the agonizing wit of “Modern Leper,” the bombast-as-last-resort of “Head Rolls Off,” “The Twist” and its least convincing apology for rebound sex of all-time. In their places are thicker but somehow blander, less urgent sounds. “Skip the Youth,” the record’s would-be centerpiece, swells through a five-minute buildup of call/response guitars; it’s easily the densest song Frightened Rabbit has put to record. But it’s also too patient by half, and the eventual climax feels less like revelation than a point the band could have made three minutes sooner. “Swim Until You Can’t See Land,” as the first single, feels overcooked if not downright exhausted: a pretty acoustic structure built around elemental metaphors and overdubbed past recognition. It is the sound of a song either bulking up toward “power ballad” or trying to date Gwyneth Paltrow. Neither is a good look.

Which is not to call Mixed Drinks, or the band that brought it to market, unpleasant. Hutchison has an ear for hooks in strange places, and these tend to salvage his arrangements even at their most overblown. Rocker “Nothing Like You” has a cheesy masculinity but still flourishes. “The Loneliness and the Scream” bears Mixed Drinks’ strongest production, intercutting its sermon with a swirl of woah a woahs and a welcome percussive jolt. And “Living in Colour” is both the best song on the record and its most euphoric: “I am floating, I am floating / With my eyes closed, with no sails / I am soaking, I am weathered / By the winter of mixed drinks / Am I dancing? Or am I simply spinning in my own grave / You were asking, you were asking / And with two steps, I’m saved.” As the album’s penultimate track, maybe this is its thesis: patience brings pleasure.

Except in music, anyway, that’s not how it works. Pleasure brings pleasure. We might call something difficult, or a “grower,” or a challenging record, but even these labels premise an immediate return. The challenge on its own is a reward, a withholding from self. It is still pleasure. Frightened Rabbit knew this and made a perfect breakup record, which is to say that Scott Hutchison—in the way all one can do is listen—got his heart broken perfectly. One gets the sense that Midnight Organ Fight worked because “worked” is all it had room for.

Where Mixed Drinks fails, then, is that by being about “what comes next,” it floats into the fog of the general; it becomes about “life.” And life meanders, and has dull moments, and needs patience and then some. Life is more than just ego. I would rather listen to Organ Fight‘s Frightened Rabbit, but for what it’s worth I’d rather write about this version. On the other hand, I haven’t liked a U2 record since “One.” Or perhaps that’s just how epilogues go: the story, since told, exposes its flaws that endure. The Winter of Mixed Drinks is an album without a reference-point. It is a kiss-off to the past, a toast for whatever is left in its wake.