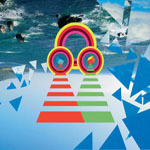 This is not a noise record. If it were it would be one of the best ones of the past, say, half-decade, but it is not a noise record because none of the things that make Street Horrrsing great have to do with its noisiness. Things are going to get complex here— been grappling with the record for weeks—and if we had to offer some advice it would be to come at the record as a gestalt. You will see a shuddering whole, something like greatness, something like beauty, despite simple parts found on any five dozen other noise or ambient or psychedelic records. So yes, that plague of fuzz that descends at the close of “Sweet Love For Planet Earth” sounds like Sightings, but it is noise-as-accent. Those blurted angry lumps of vocals leading up to that point? They are also not noise; they are percussion, consonance without precipice, soothing or deliberate even as the shrieks climb. And they climb obviously: it is build-up toward a climax, like that trilling guitar line that goes on for like five minutes toward the end of “Free Bird.” Ouch!

So instead of allowing Fuck Buttons avant hybridity—and admit them a dime-a-dozen—we’re more apt to give them a souring bag of tinnitus-worth stalwarts and send out Street Horrrsing as a vulture of forced relevance. For a moment we’ll pay lip service to the avant-garde and noise purists so ready to disavow Fuck Buttons, putting those concessions up top because those folk are quickest to crucify. And it’s in that black and white we’ll contextualize: Fuck Buttons make erratic electronic music with sweet tendencies as if they are the first to conceive of such; stepping onto the dark side of the moon where they assume no footprints have yet been set, their take on experimental structures and melody ignores the strides of the last thirty years or so in outing the already out—or in-ing the already in?—and just sustains a take-it-or-leave-it innocence. Instead of chapping the listener with unflagging ignorance, the effect is mostly divorced from the head, de-intellectualized, and left to gurgle, churn, and dope along beautifully.

The flip argument—that is, that this record represents an advancement for “noise” music—is just as nice to think about: all those great ideas and attitudes funneling into Street Horrrsing to make an accessible noise record, something both familiar and alien, both warm and unnerving. But forget the possible oxymorons at hand. What’s most damning is trying to pigeonhole the record, talking about all the indie kids pulling this thing from the dank hole where it could have been spawned. That won’t do anyone, Fuck Buttons included, any good, because then Street Horrrsing gets prescribed with a certain utility—about how here’s the record that will kick down some doors, attain some wider legitimacy—and the album becomes a chore…for most people, for those targeted in this great upheaval of noise standards that just want noise music to be a tad prettier. We mean the people in the crowd at a recent Boredoms show that fidgeted nervously for two hours, their anxiety punctuated by the few moments when the band actually seemed to be playing, let’s call it, music. That’s when a lot of folks cheered. Or at least when some dour faces smiled, relieved from the barrage of sonic shit pelting them in their most sensitive parts.

Fuck Buttons has two songs for them, the aforementioned “Sweet Love For Planet Earth” and “Bright Tomorrow,” and they are both staunchly beautiful and rudimentarily difficult. But they aren’t, ya know, noise music. “Bright Tomorrow” is the juncture of wheezing house synths and bass drum pumps buttered by a long beesting midi grind and arguing screams sent through some double-A batteries. And this is the crux of the Fuck Buttons dilemma: no matter how that sounds, in practice (and within the context of the record) it’s just the fucking jam, like some pulsing late-night bliss-out in front of a detuned television set whereupon everyone just sits on the couch exhausted but loving it. It is confrontational in places but the overarching goal is one of absolute aesthetic pleasure, right down to the structure of the record. As “Colours Move” closes the album’s reign of terror, voices losing all trace of humanity, the bleeping chimes of the record’s first track return, an almost-mute synth glows, and the record seems to ready itself for a replay. Kids’ stuff maybe, all that build-up, climax, and inversion, but the effect is still wholly crippling, touching, a tummyache. God knows what kind of mindfuck the show could be, especially in a little room.

It’s a noble pursuit, though, making sense of Fuck Buttons, and maybe seeing their show would help. It demonstrates that somehow we’re trying to accept or at least entertain our visceral reactions to music like this that both panders to expectations about what it should be and tastes what it shouldn’t. So we follow paths back to the basement: that Sunn O))) and Wolf Eyes could maybe explain the bobbing drones, bathed wails, and imperturbable focus of tracks like the most-noise-ready “Okay, Let’s Talk About Magic” would neglect the chord progressions of the track’s second half, the melody, egged by subway clicks, that loosens the bulwarks of static into digestible swathes of color. And then Black Dice could maybe shed light on that indelible desire to knead beauty out of the surliest knots of chaos, but they’d be bored by all the minimalist putzing that others might label cathartic build; and then there’s the vaguely exoticist, clacking drums of Animal Collective siphoned backwards through “Ribs Out,” but that’s all that track is, that and faux bird calls that end up sounding like an offensive impression of someone with Tourette’s, which is a bit like Animal Collective anyway; and then it’s kinda cool to couch the Microphones in here too, because before Elvrum made stupid theme albums and released seemingly everything he recorded, his imagination was more juvenile, more insular, willing to follow notions of ambience and noise to their idyllic ends.

Which goes a long way to simply describe how resolutely accessible the record is, how it reaches into its forebears’ guts for tools of the trade or for general advice and comes out an ecstatic organ. It’s like: Fuck Buttons are to noise music what Stars of the Lid are to ambient. So: okay, they both tidily are, but that’s just it—Street Horrrsing is too formal to be what everyone may want it to be. It won’t bring anything out of the basement because it never goes into the basement in the first place (maybe just dipping a toe or two into the dusty shadows). And that’s fine. That place can get scary, anyway.