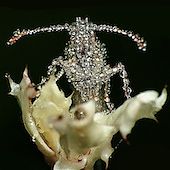 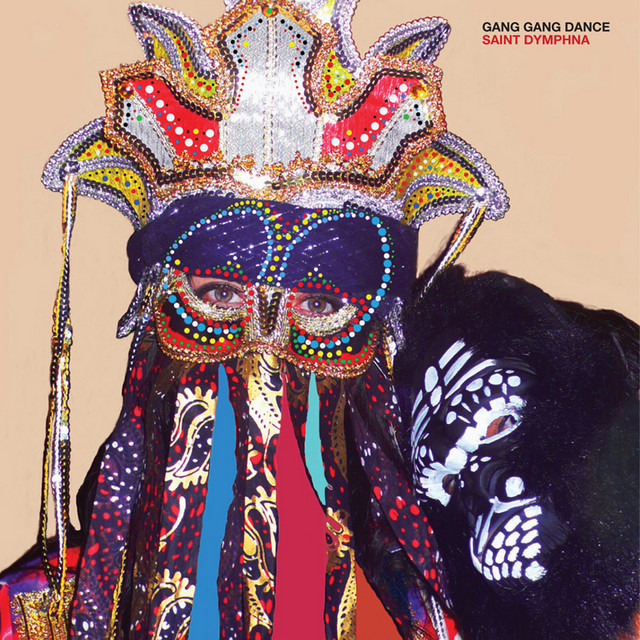 God’s Money (2005) came out before I started writing here; we didn’t review it then, so in brief: amazing, unique album only marred perhaps by a kind of sonic smoothing of any edges that give you something to hold onto. I mention this because the biggest difference—what this lengthy 3-year gap since that album was released has meant for the band—is the way the band has remedied that problem. In other words, God’s Money was awesome too; Saint Dymphna, however, is more likely to pull Gang Gang Dance out of the out/niche set and into indie mainstream. But also it does that while maintaining Gang Gang Dance’s signature sound, and so works in a way that similar efforts like Magik Marker’s Boss (2007) failed.

But let’s talk about this album on it’s own terms. Because I think the album’s worth talking about not as a paring down of Gang Gang Dance’s sound (it isn’t) or some plot to make the band more accessible (again: not really) but rather as a fundamental refinement of the band’s particular brand of noise. This is a new sound that in many ways thrives off the old sound. And I make this distinction because the last couple of years have seen us becoming more complacent with the idea that art rock or Brooklyn whatever must inevitably tone down to some point where everybody can enjoy it. It’s not that it isn’t partially true so much as I’m getting dissatisfied with the inevitability of the narrative, as if we couldn’t tell the story any differently. Bands like the Animal Collective may have a Here Comes the Indian (2003) in their past, but their new stuff isn’t necessarily any less radical. Neither is pop music something that exists outside of experimentation.

Saint Dymphna isn’t Gang Gang Dance growing more accessible; Saint Dymphna is Gang Gang Dance offering us possibly the most complex and weird dance album of the year. And that’s something that should be celebrated, because the hardest thing about experimental music, to me, is making it relatable and translatable to all kinds of audience members. Which isn’t to say out fans and pop fans; it’s to say that that moment where a band finds a way to express the sometimes inexpressible with sincerity (and maybe humor) in a coherent and distinct aesthetic package is the most important thing music can do, to me. And to say it in a complicated way is even better, which is why I always bristle when the “accessible” tag starts to elide the fact that the band is still operating on the fringes of traditional music expression.

Especially because this album kind of does it backwards, or does it in opposite land. Clay “Erykah Badu is my Saviour” Purdom was already cautioning us that there’s no way Saint Dymphna had the kind of heft or gravitas to be album of the year, and…that lack to me is sort of the point of the album, though I’ll leave AOTY status to the number crunch in a few weeks time. What I mean is Gang Gang Dance used to tow the line between sincerity and hokeyness with the vague mysticism stuff that provided an aesthetic rubric for their music. And that’s always a risk when you’re in this kind of band, where you pick a kind of aesthetic niche or hook that gives some kind of weight to your noise. But just like the childhood animal fantasies of the Animal Collective no longer seem or sound particularly childlike, Gang Gang Dance has mutated those aesthetic impulses into something immediate, sincere, and often subversive. I’m not sure whether this was calculated or incidental, but the funneling of the Gang Gang Dance sound, erratic impulses and all, into straight-faced dance tracks directly confronts the typical divisions we make between serious and superficial music. This is gleeful construction, I mean, but they know they’ve nailed this album—this sound—because they know they took the time to nail it. Suddenly they’re winking at us from behind the curtain in a way that “Nicoman” from the RAWWAR EP only hinted at.

Because in one sense Clay is right—track to track, I wouldn’t say there’s any mentionable gravitas. There’s soft lush pop music pulled off with just enough humor to sell it on lead single “House Jam.” There’s the collapsing structures and Loveless-ness that inhabit the gorgeous “Vacuum” but there we also get enough bratty synth curls to give the whole thing a Saturday Morning cartoon battle feel. There’s the Tinchy Stryder rap cameo on “Princes” which works precisely because the band gets him to rap over their music, rather than trying too hard to make their music sound like hip-hop. There’s the constantly mutating swirls of “Desert Storm” punctuated by endless barrages of percussion. Most notably, though, is that each track is a lot of fun, spinning out this new aesthetic in very different ways, highlighting new strengths of the band every time you turn a corner. So “fun” is the operative word here.

But, what of the impact of the album total? There’s something downright overwhelming about this disc, whether it’s the unremitting playfulness or the way the band pulls together beauty and energy from the oddest of sounds or the way over top they sometimes launch into abstract political commentary. Saint Dymphna is the patron saint of the nervous and mentally ill, and beneath the joyful barrage the band creates you can hear that uncertainty and mood-shifting boiling, giving the record’s music a fluidity that hisses and pops and fills the air with vapors. In that sense this album seethes beneath the surface, pulling in and regurgitating a whole array of human impulses into a fantastic and fascinating take on contemporary and out music. But you can take it in both ways—frivolous or profound—and that’s even better. “Gravitas”? Saint Dymphna carries the weight of being great music while it’s also throwing that weight (with ferocious “heft”) in your face like an inciting snowball made of good karma. Then just when you think you’re getting into the funk of it, this album will turn around and kick you in the ass—with a smile on its face. So, everybody, please enjoy the most inspired and loving ass-kicking you’ll get all year.