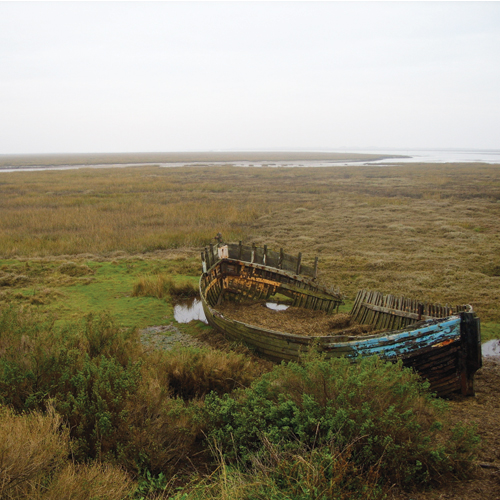 Of the Sea and Shore

A man taking a stroll along the Essex coastline finds a lamp, rubs it, and releases a genie. “Sorry mate, credit crunch,” says the genie, not in Robin Williams’ accent. “You only get one wish, so make it careful.” Without drawing breath the man blurts out, “I want to go to Disneyland. All the time when I was a kid, I’d see adverts for Mickey and Goofy, but I’m shit-scared of flying; proper BA Baracus. So my wish is this: I want a motorway that runs from here into Florida, across the Atlantic, so I can drive there in my car.” The genie winces and wrinkles his nose. “Jesus Christ, mate, that’s a task and a half. That’s gonna take me a lifetime. I’ll have to do the steelwork, sink the foundations, mix the concrete, build over a few hundred flight paths, shipping lanes, conservation zones… isn’t there something simpler I can do for you?” The man thinks and thinks and thinks, eventually conceding, “Yeah, there is, actually. Could you tell me how a woman’s mind works?” The genie sighs and rubs his head. “Fair enough, mate—how many lanes do you want?”

Gareth Hardwick doesn’t want to go to Disneyland. Gareth Hardwick, in all probability, wouldn’t even rub the lamp if he found it. The Nottingham-based play-it-all has a serious meditation habit—he owns the Low Point imprint, home to all things drowsy and elongated—and would be just as content watching a pebble roll ashore as he would be speaking to genies. To Hardwick, the pebble is the genie: it might not have a cloud of smoke for legs, but the way it contributes to the minutiae of the earth is what drives Hardwick to compose, or, in the case of his third album, drives him to spend a winter on the beach with a boom mic and a car full of instruments. The word “album,” by the way, is used loosely here—Of the Sea and Shore clocks in thirty-and-a-bit minutes, shared between two sprawling tracks—but the words “sea” and “shore” are not: Hardwick saw the new year in from Britain’s least appealing coasts, drawing inspiration from the mist. Surprisingly, his musical response sounds tropical and pacifying in its delivery, meaning either Hardwick was phenomenally lucky with the weather or his binoculars stretched to the Pacific. Personally, I vote for the effects of inhaled sea air and its pervading influence on the brain. The zinc does things to your neurons.

In typical Low Point fashion, Of the Sea and Shore is made from patterns of undulating drone, though strangely requires only minimal patience or the listener to disappear in its currents. The electric reverb opening of “Part One” doesn’t so much build as sparkle—if it does build, it’s invisible, like the tide if you sit down and stare at it. What sounds like marine life glittering in the distance eventually melts into a Fender glow, playing with what geographers call “constructive waves” and what other people call “waves.” There are no rogue dumpers here, and even if there are, Hardwick’s too wasted to notice them—an impressive feat given he spent winter suffering the sideways weather at Dungeness. It’s a gentle but haunting set-up to his record, soft like dissolving codeine, and as the overlapping glows begin to ebb and retreat, cymbals hiss, Dirty Three-by-the-beach-style. Yes, it wasn’t going to take long for a new sea record to be compared to the Australians’ masterpiece along with Xela’s The Dead Sea (2006), it forms the longitude and latitude of the saltwater concept album. OTSaS bobs somewhere in the middle: a stoned cousin to the latter, a Justin-Bieber-slowed-down-by-800% to the former.

A uniqueness in Hardwick’s songwriting is there’s no crossfade between movements, implying he wanted to convey some of the stop-start mechanics he had to endure while recording his journey. Even the tracks themselves have obvious inner breaks, and as “Part One” dips you learn how to see them, kind of like the way a late night boat-spotter knows how to tell cruise ships from tankers (narrow lights equals liner, dots means things with containers on). If a collective mind like Godspeed You! Black Emperor had been given final say on this production, the sleeve art would label “Part One”‘s ghostly fadeout “A Graveyard for Spent Lighters, French Polythene and Sandals.” Instead, Hardwick plugs on with nothing but the music, as dogged as a tourist erecting windbreaks out of season.

“Part Two” opens with his tourist getting a summery reward, and sees the guitar dip and liquefy until it ripples like a lagoon. Hardwick then turns up a little coastal static—the kind you get on an old transistor if you live near an active navy town—and slides slowly into a wheezing shanty made of drones descended from the accordion. The scuba noises, boatyard effects, and chains rattling in the deep are apparently sampled by Hardwick himself (though how he got a dictaphone to work in the sea I’ll never know), and he builds into a sense of peril, shark fins circling in the dark. Eventually he does something with the sea no ocean record has attempted: he boils it, swapping the final tones of “Part Two” for a pack of hissing cymbals. Their sand-like rush echoes every groom’s worst nightmare: you’re alone in the surf and three time-zones from the wedding, new tattoos zodiac’d on your nakedness.

Tattooist or not, Hardwick gets you back to bay in less than thirty-eight minutes, having detoured through some sly, choppy waters. There are moments on this album where he’s as cruel as the big wet mistress he’s sailing on, using misleading lights like a prankster in a tunnel. At its bleakest, Of the Sea and Shore is a record for drunkenly trying to identify which seaside plant might be edible; at its brightest, it’s the most evocative reconstruction of an ocean through guitars since the Dirty Three went paddling and said, “Let’s jam!” Whether you you want to jam or not you should at least make time for the voyage, not least because it captures the sea without dithering or getting washed under. Seriously, what could you possibly lose from spending thirty-eight minutes on a boat? Provided it’s not a boat trying to navigate Cape Horn: nothing. If you can’t stomach that then you must have rabies. Either that or a paralysing crab phobia.