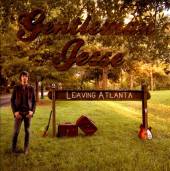 Gentleman Jesse, a.k.a. Atlanta punk-about-town Jesse Smith, seems to specialize in the ephemeral. Though I remember liking his group’s 2008 debut, Introducing Gentleman Jesse & His Men, I couldn’t tell you too much about it apart from its generalness: retro, punk-tinged power-pop in the vein of, say, the Exploding Hearts, Elvis Costello, and the Ramones. On Leaving Atlanta, the band’s sophomore effort, Smith once again demonstrates his boundless energy and way with a melody. But built as they are on rock ’n’ roll clichés, these songs hold the listener at a distance. It’s a bit of fun, but nothing more. Unlike their influences, something about this band doesn’t really stick.

Maybe that something is sameness, but if so the record’s rescued just barely by small yet integral flourishes: the scrape of harmonica on “Eat Me Alive,” the crunchy Hammond organ backbone of “Take It Easy on Me,” or the blues bar piano of “Rooting for the Underdog” make all the difference. These songs are clearly the standouts—particularly “Take It Easy on Me,” which blends Smith’s garage punk style with an appealing Springsteen shagginess. “What Did I Do” and “Eat Me Alive” bare their incisors too, the latter being the only song to directly address the album’s titular city: “I got a place to dig in my roots / But it gets so hot I want to lose my mind / Some people do, it happens all the time.”

It’s a shame there aren’t more specific cuts like “Eat Me Alive,” as one of the problems with Leaving Atlanta is its rigid adherence to rock mantras. Smith’s got an opportunity here to take rock staples like the “yeah, yeahs” of “You Give Me Shivers” or the call-and-response of “Careful What You Wish For” and push them into something weirder, something wilder than anyone could expect. I believe he has it in him. But nope; lines like “You might sing the same song as me / We just don’t sing in the same key” pretty much set the album’s tone. “Careful What You Wish For” is undeniably catchy, sure, despite its predictability, but Beatlesque to the point of distraction, all three-part harmonies and chiming guitars.

One influence Leaving Atlanta proudly wears on its sleeve is Jay Reatard’s (memorialized in the liner notes), particularly that of the unhinged urgency of the Reatards’ early work. Both Smith and Reatard mine their fair share of well-trod punk rock territory, but at least Reatard, like great garage-rock frontmen before him, could turn tropes on their heads through his crazy-man delivery (when he bellows, “Get outta my head and into my bed,” one can imagine the object of his affection backing away slowly). Smith is more of a cipher—when he repeats the chorus of “I’m a Mess,” for example, he actually sounds as put-together as he looks of the record’s cover, all skinny brown suit beside artfully arranged suitcases. Energy’s there well enough, but it lacks any force of personality, and coupled with the unspecific sentiments within these songs, little about them is memorable.

In fact, the best thing about Leaving Atlanta is probably its momentum. Fast-paced and cohesive, it’s equally unflagging through songs both frantic and mid-tempo. Leaving Atlanta is a party record after all, a companion to the din of drinking and talking, made to sound like something old and obscure someone was savvy enough to unearth and put on at just the right time. And like the din of drinking and talking, you won’t remember it much the morning after.