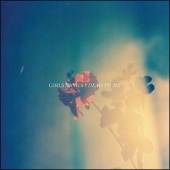 Seeing as I didn’t begrudge landlocked, Indiana-based We Don’t Surf their tossed-off take on the surf-rock genre, it’d make a goodly hypocrite of me to turn a squinty eye on Belfast’s own Girls Names. Geographically, they’ve even got their (granted, frigid) little nook of ocean. “We were just two guys from Belfast very naively making music for ourselves and our friends, and then all of a sudden one of our favorite labels on the other side of the world wanted to put a record out for us,” they’ve said. Fair enough: Belfast dudes got some fucked ideas about what to do with escapist surf-rock. An uncomfortable thing to admit, but, those frigid, fucked ideas are probably the reason I’m listening.

At times, it’s hard not to see still-emerging surf-and-noise-rock bands as manipulators of or, maybe less unkindly, survivors of an abiding trend. And Girls Names come off as having inadvertently ridden the swells of aesthetic popularity—as well as surfing a number of noteworthy buzz labels for such a small, Northern Ireland band that formed under the single premise of “total escapism.” Founding bandmates Cathal Cully and Neil Peel hooked up with Slumberland Records (Pains of Being Pure at Heart, Weekend) and, after adding friend and bassist Claire Miskimmin to help flesh out the noise part of the noise-rock, released an EP on Brooklyn’s Captured Tracks (Wavves and Dum Dum Girls), settling, for now, on London’s Tough Love for the release of their first full-length LP.

Girls Names’ Dead to Me is a fitting (and fittingly titled?) surf-rock apparition, possessed throughout by equal parts dreary and rousing. Fading in like a warped record, the album seems to reincarnate more than it actually begins—eerily and openly similar to early ‘90s Slumberland-labeled Black Tambourine. So it goes that Girls Names submerge sock-hop garage-gaze in that familiar late-‘80s/early-‘90s guitar-thick Jesus and Mary Chain distortion and then unexpectedly toss it in a gaseous, frenetic, and at times very goth concoction. The way Cully’s vocals swoop in to occupy such a low and dusky range for the duration of the album, so damn low and breathy it could slip under the door like prop fog to eerily placate my grasping for something novel to resuscitate my verve for the aesthetic: oooh boy.

It’s an album possessed throughout by the specters and influences of a number of noise-pop Scottish/UK bands, from opening track’s title “Lawrence” (a potential nod to noted influence Felt’s lead vocalist Lawrence Hayward) to “Kiss Goodbye,” which feels like a sequel or response to Black Tambourine’s plea to “throw Aggie off the bridge / toss her in the drink.” A good twenty years after the fact, Cully seems to punt the ball back in their court with an identical request and weighty admission they’re just too young to care about that shit. “Across the ocean is where my heart should be” is a resigned confession in odd contrast to, originally, much more longing: “It’s hard when you live across the sea.” While Black Tambourine offers up a morbid tidbit of sweetness, Girls Names proffers a remiss shrug.

Though “I Lose” and “Cut Up” more than substantially rouse the pulse from or in the midst of the JAMC murkiness, it’s personal favorite “Bury Me” that offers up a premise for the album. Lyrics “Bury me / In a wall of sound” just strike that “truer words never sing-spoken” chord. From album title to sentiments, it’s an LP that’s less about escapism and more about shrugging away, about being buried in sound and resignation.

Even while a number of the surf-rock staples fade out from my playlists, a few bands manage to rouse a pulse and flicker of zeal. A well-timed whammy and languid guitar solo unfurling over a crisp ‘50s/’60s beat…that’s about all it takes. Certainly though, it’s more of a ghost of its former appreciation. If surf-rock is, at least for the time being, dead—or something that only feels briefly alive in scattered moments—then Girls Names is the last whiff and remnant of its spirit, whispering under the door and darkly skulking in the corner shadows.