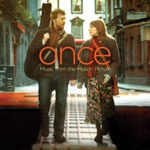 It didn’t have to be like this. This OST didn’t have to blow its load so immediately, so earnestly. Once the movie, it made me blush; I went rosy leaning forward in my tiered theater chair cupping my hands together. The soundtrack got my jones off and was then put aside.

Let that be a shrouded warning to you who have not seen John Carney’s miniscule masterpiece, for the “M” word can apply to the film but definitely not to the soundtrack, even though the film is, regarded coyly, something of an unconventional, un-Golden-Age-Hollywood musical and bears in full visual logic every song on the soundtrack. And please let no sexual euphemisms disgrace an otherwise straightforward anecdote up there at the top. Please, also, disregard any sex puns throughout. Once, both of ‘em, are only sexy by proxy.

What the soundtrack seems to plumb forget (lest we trip into some discussion about marketing strategy which, c’mon) is that the movie is subtle in almost every facet of its 88 minutes except for in the songs themselves, which worship traditional pop and folk structures as if no other songstuff could ever exist in the vagary’d streets of Dublin. Violins and fiddles glue bridges to choruses as the harmonies between songwriters Glen Hansard and Markéta Irglová allow even the most cliché, interchangeable lyrics about love and lost love and unfound love to fudge into something that worships, down to the marrow, a stark admission of loneliness. When Hansard sings, “You don’t disappoint me / I can do that myself,” he’s already accepted his lot, resigned to a teary, temper-tantrum way to kill the song.

So is Glen Hansard a good actor or just a really lonely guy? He grew up in a working-class family in Dublin, quit school when he was young to be a musician, making some way playing for change on the streets. Later he created the borderline-AOR group the Frames and released seven albums in ten years. With Markéta Irglová he made The Swell Season in 2006 -- which featured four songs later entered into Once -- and “Falling Slowly” and “When Your Mind’s Made Up” appeared on the Frames’ recent The Cost in perhaps beefier, bandier versions. Irglová is a Czech-born songwriter and was seventeen when Once was made.

The movie’s kinda like all that: wanderers find each other for a week, grow sacredly close through creating something honestly beautiful, and then part to continue living tenuous lives. It’s a dark way to consider such a lovely and clean piece of work, but then the album, the Hickory Farms Christmas catalog of hardy sausage ‘n cheese trays, manhandles the movie’s whole arc. After all, these songs are precious, fragile like Celine Dion’s wrists, and no matter where they came from originally, in the film they fit into a believably touching story.

Blame it all on “Falling Slowly” -- the clicking, the song of Solomon, the happenstance fit for only one lifetime. C chords slipping sleepy into F chords, the song seems to begin at the eye of a funnel and fan out upwards towards the funnel’s mouth; a simple upstroke-downstroke manifests in a walking symmetry, Irglová’s milquetoast vocals surer and surer, holding busker mitts with Hansard’s birdish squawk at the climax, the inevitable catharsis where all mirrored images meet. We fall for them as they fall for each other as the notes fall into each other. And, yeah, the song plays a crucial role to the romance at the heart of the story that never truly manifests as a romance. But it also operates as the “Once” within Once, the three-act dummy play of Boy meets Girl in four minutes, first cautious and intrigued, then surprised by seamless connection, and then surging forward towards an undoubtedly goopy ending. Yet, there at the headlights of the soundtrack, “Falling Slowly” betrays the restraint of the film by making Boy meet Girl and live happily ever after. Prescient piano and strings seal the deal with a triangle of cupid arrows, fulfilling every romantic expectation the film avoids. Further into the movie, when Hansard’s and Irglová’s characters attempt to improvise an duet together, the song exists wholly in the instant of artistic conflation, as if their discovered bond is romance and marriage enough, soulmates satisfied. That’s why the soundtrack, from its very earliest note, is a cheat.

Because nothing vitiates that near fatal flaw resting at the head of the tracklist. The apex of “Falling Slowly” is later monkeyed in the spinning lamb skewer of “When Your Mind’s Made Up” and the grist chute’d through the last rush of “Trying To Pull Myself Away.” A jolly pub song at its best, “Gold” still attempts no amnesia with the fingerpicking in the introductory arpeggios of “Falling.” “Fallen From the Sky,” a prodigal casiotone’d herring, seems all the more the outsider because of its suddenly robotic beat. Off it: the songs aren’t bad, they’re actually very lean and affecting. They’re just absolutely expected when “Falling Slowly” steers the pack. The sentiment’s expressed all over again, in Irglová’s careful “If You Want Me” or in the long rustle of “Once,” that love is brutal but love is worth it because love wins in the end.

And all this does is ruin a good story with potty-headed thinking. Potty-headed thinking is when a soundtrack loses all rewarding emotional cues previously established in the movie and instead tries to model itself a separate entity, a mish-mash compared to its older brother. For shame.