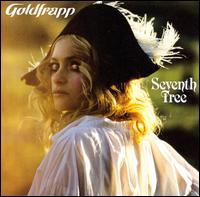 At times, it’s hard to tell how deliberate Seventh Tree‘s awkwardness really is. Ever since Felt Mountain (2000) Goldfrapp have seemed out of step. Their debut reeked of film noir and cold Germanic impass a full three years after Portishead’s eponymous second album. Black Cherry (2002) saw a desperate rethink resulting in synth-driven sex-glam, despite the fact that Fischerspooner and Miss Kittin had been exploring variations in fuck-hungry electro for the few years previous. There’s Goldfrapp arriving late to the party again. But were they there to join the scene or there to crash it?

The tide seemed to turn when 2005’s futuro-disco Supernature crossed over into the mainstream and suddenly we were all dancing to Goldfrapp’s drum. We couldn’t get Kylie out of our heads, Rachel Stevens was bothering the charts with “Some Girls,” and even Richard X was revisiting Gary Numan and the Human League with his production work. Three years on and it could be argued that traces of Goldfrapp glitter can still be found in the glacial disco of Madonna, Roisin Murphy’s move to electro-pop, and the mainstream emergence of robo R&B: Justin Timberlake’s FutureSex/LoveSounds (2006), Rihanna’s Good Girl Gone Bad (2007), and most notably Britney Spears’s unfairly maligned Blackout (2007). The time for Goldfrapp surely is now.

So, of course, Goldfrapp have shed the sex-Moroder-robot-Bolan-fuck-disco like a used condom and re-tooled themselves as a whimsical psychedelia and pastoral folk outfit for the disappointing Seventh Tree. Opener “Clowns” is typical of the fare here: Alison chirrups like Kate Bush playing a milkmaid over a syrupy mix of acoustic guitars, antique keyboards and, lazily, Harry Robinson and Robert Kirby’s string arrangement from Nick Drake’s “River Man.” As this spills over to the Liz Fraser lilting “July-ly-ly“s of “Little Bird,” anyone with a passing interest in music will have their patience stretched. Every song is too aware of itself and the themes of the album, both lyrically and musically; each robs stylistic cues like a greedy magpie. “Happiness” tugs a forelock at the Beatles-esque march of the Polyphonic Spree with a cloyingly “join our club for spiritual enlightenment”-themed lyric. “Eat Yourself” uses the scratchy gramophone cooing of CocoRosie. And “Cologne Cerrone Houdini” stumbles along with the thwacking wooden bass of Serge Gainsbourg’s Histoire De Melody Nelson (1971), even using its signature stabbing strings.

It seems that in the rush to disrobe from the spangly catsuit of hedonism, Goldfrapp have lost their sense of self and, more importantly, their sense of fun. It is only in the throwaway pop of “Caravan Girl” that the pace ever steps above balladry. And, as if to hammer the point home, Alison feels lyrically compelled to remind us that the party is over. Whether it’s in “A&E”‘s hangover, “Clown”‘s anti-plastic surgery rant “Mahogany titties that live on and on,” or “Some People”‘s prosaic lament “Some people need more than a slice, when it fades, when the glitter’s gone,” Goldfrapp is self-consciously denying us the things we briefly thought were amazing about them in the first place, which…fine, but why be so coy about it?

Especially since the party is still going strong. While the rest of the world is dizzying itself on evermore adventurous electro-pop, Goldfrapp have given up their brief lead and willfully moved out of step. But while they step back, everybody else steps forward. Hell—people have always stepped forward. From Björk’s crystal-perfect Vespertine (2001) to Kate Bush’s emotive masterpiece Aerial (2005) to Panda Bear to whatever else there has been a gamut of pop albums and pop artists exploring organic textures while retaining their original voice and, more importantly, not seeming po-faced. If Goldfrapp is this bound and determined to erase themselves from that history of millennial electro-pop—by playing chafe, mind—I see no reason to try and stop them. They didn’t start this party; it’s not at their house; they can leave, sure, but they can’t shut it down.