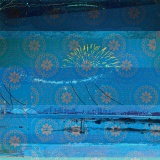 As the world slowly reverts to the pre-album era and Sufjan Stevens’s greatest fears are realized, as the LP is less and less able to define an artist’s sound, a fan’s investment in music takes on a different form: it’s more immediate, more omnivorous, more like a one night stand. Enter Gold Panda, an East London producer who’s built a fine little career off of singles; enter Lucky Shiner, a surprisingly subtle album given Panda’s roots, with songs peppered by variety more technical than showy. Kid’s got guts; just ask Voxtrot—something like this could end it all.

Gold Panda’s singles suggested many possible directions, and one of the saving graces of this, his debut album, is that the producer manages to maintain the same untethered feeling perpetrated by his smaller releases. There aren’t any lucky breaks on hand like the incredible sample that anchored his breakout single “Quitters Raga”; instead there’s a rock-solid collection of pleasant, drifting instrumentals. Opener “You” takes the vocals of “Raga” further into Oval territory, all without sacrificing the found hooks that make such things work. Past that, Lucky Shiner gets better produced and less memorable, the work of someone who is willing to sacrifice immediate gratification for a shot at not being the blog version of Fatboy Slim. In other words: this is album as document of growing up in public, the inevitable recognition that the success of a single often boils down to some cheap thrills.

The glitchy house of “Before We Talked” sounds like it came from any kid with Reason and a Myspace page, but its context makes it seem more like a step in a positive direction from Panda’s early work. “Vanilla Minus” does the same thing, but with better drums, and the strings and bells of “Snow & Taxis” make an excellent foil for the thin 808s that bands like Salem have turned into a weirdly ironic love letter to mainstream rap. Around those songs, new Gold Panda modes are invented: Reichian vibraphones on “Same Dream China” and “I’m With You But I’m Lonely”; a straight-up acoustic guitar breather on “Parents”; pensive beats and layers of synths on “Marriage” and “After We Talked.” The final two songs, “India Lately” and another song called “You,” combine all of these elements—the vocal-chopping, bigger beats, bigger synths, atmospheric stuffs—into what might not necessarily be a eureka moment but what exists as the most technically accomplished run Gold Panda’s executed so far.

“Quitter’s Raga” was too improbable to build a career on, and, alone, none of these songs give an indication that there’s a sound here that can’t be boiled down to “chopped electronic stuff with a vaguely Indian sample theme,” which sounds gross and overdone. But here Gold Panda is putting in some serious legwork, setting up foundations for a complex set of musical tools he’ll eventually wield to produce a lot more than one-note novelty singles. Lucky Shiner is a good argument for the album as a conceptual whole, and for a musical environment a bit slower than the singles-based landscape that birthed Gold Panda as an entity to be reckoned with. I’m convinced Gold Panda is more interesting than just any pleasant electronic producer plying his trade with a little bit of dancefloor fluff and little bit of post-dancefloor snuff—and Lucky Shiner is only the beginning. It might just be good self-branding, but maybe that’s all it takes to get started on a career wider than seven inches.