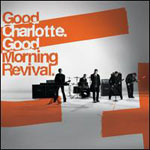 Tweet
When I first posited to my CMG colleagues that I’d be reviewing Good Charlotte’s new’un this week, boatswain Dom was quick to counter: “Is the Good Charlotte even worth doing?”

This is a reasonable question. After all, the Madden twins haven’t tapped into the emo-jiving mascara-clad NME set with the success of Fall Out Boy and My Chemical Romance, so I don’t have any reason to claim the record is noteworthy for its popularity. And there’s been nothing to suggest that Good Morning Revival would be anything other than a synth-rock update of the lazy punk-pop motifs of the group’s last three turds, which means it’s not like this record is suddenly so good it warrants CMG’s prized attention. No, reviewing Good Charlotte’s latest gives me a chance to deliberate on something really fucking weird that happened to me a couple of years back, when un-ironic proto-"emo nouveau" hit “Lifestyles of the Rich and Famous” flickered one spring Sunday afternoon on MTV. That is, my dog died during the second verse.

Yeah, that’s not a joke. When y’all hear that song, you think of beers and Metallica reuniting, or maybe Ashton Kutcher in Just Married. When I hear “Lifestyles,” I tip my hat into the river and howl. Still today, after all the veterinary fine print, it seems weird and unsettling, and not the kind of “unsettling” that’s Hollywood spot-lit or redolent of divine intervention, but the kind of deeply awful, bolt blue “unsettling” that I usually associate with people reversing over mangled squirrels on deserted motorways. This cruise ship siphoning of “Lust for Life” is a gross piss take as it is, all adenoidal rapaciousness and enfeebled amp sterility. Factor in a dead dog and it is the kind of “big event” song that can completely transmogrify one’s perception of an artist, or at least bestow upon them some bloated personal significance. So, when other people were losing their virginity to Britney, Good Charlotte took out my hound.

And this was no back porch runt. This was Mulder, a healthy (albeit old) dog, really in the prime of his post-castration years. An otherwise robust beast that could stand toe to toe with Thurston, never flinch during Doolittle (1989) and appear unconcerned when Eminem raped his mom (or whatever). Now, I’m not claiming the Maddens flipped some switch or instilled a subliminal canine apoplectic trigger in their hit song, nor do I think the lines “Did you know when you were famous you could kill your wife / And there’s no such thing as 25 to life” contain some encrypted instruction for the apocalypse. No. Instead, after all these years, I’ve learned to accept: to accept first that my dog had great taste in contemporary music, and, secondly, to accept Good Charlotte, because it doesn’t seem like they’re leaving anytime soon, considering the publicity storm of their latest.

Good Morning Revival follows 2004’s hopeless The Chronicles of Life and Death, where Good Charlotte’s high-end power-pop strut attempted ill-advised genre crossover party tricks and ended sinking hookless, drowned out by the efforts of their sharper peers. The title, then, is meant to reflect some internal change in the band’s dynamic, by which the experiential lessons of life and death are put in some wiser and more commercial perspective. Though what this really amounts to is some giant globules of synth, you can’t fault the boys for being tuned into fashionable (if dying) trends, so that Meteora (2003) auteur Don “Don” Gilmore’s sharp-suited producto-perm makes Good Morning Revival sound more unabashed '80s revivalist than cynical '80s proper. This isn’t all bad, though. Gilmore’s stylised production job fits the stadium mode perfectly: it is “big,” it is “spacious.” The instruments are all satisfyingly full-bodied, fleshed-out rather than densely packed-in, giving the more showy numbers here, like the entirely superficial grand-standing of “Get Your Hands Off My Girl,” a prickly sonic punch heretofore lacking in the group’s sound.

Good Morning Revival is the first Good Charlotte album to sound vital. It also houses some of the band’s worst material, half of which seems to be third-hand re-interpretations of radio rock staples. Take the Coldplay track “A Beautiful Place,” all nostalgia-smitten xylophone plinks and yearning slide guitar. It sounds at once horribly out of place and horribly deliberate, positioned between two by-the-numbers mallpunk workouts, the first of which (“All Black”) is made notable only for its awful lyrics: “Take a look at my clothes, all black / Like Johnny Cash, all black / Like the Rolling Stones, wanna paint it black.” Too many of the songs here contain tacked on melodies, or are bolstered by lego-built rhythms that sit like slippery rags on the granite thud and march of time. But then, what were you expecting? This is a Good Charlotte record.

It’s a bit of a shame, because the over-driven, chunky rev of the guitar sound here would have been a much better fit for the group’s previous radio hits, whose overbearing catchiness was leavened by the paltriness of the instrumental backing. There’s nothing much catchy on Good Morning Revival, and a great deal out of it sounds awkward in its attempt to seem serious or mature, like the aforementioned name-dropping. This attempt at maturity ends up reeking of po-faced insincerity when juxtaposed, perversely, with the thrifty, throwaway sounds of faux-disco shtick, the risible dance stomp of “Victims of Love” sitting awkward with its morose recapitulation of Kate Bush’s “Hounds of Love” hook. Worse still, it sounds like the band has tried hard to hit their stride, recruiting the big name grit of Avenged Sevenfold’s M. Shadows like a sluice to “The River.” The problem is that for all the slick operations and glorious machinations of the marketing and production, this band has run out of steam; soulless without being undead. The truth is that Good Charlotte didn’t need to try this hard to sound so awful; they just needed to be as Good as they always were.