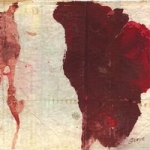 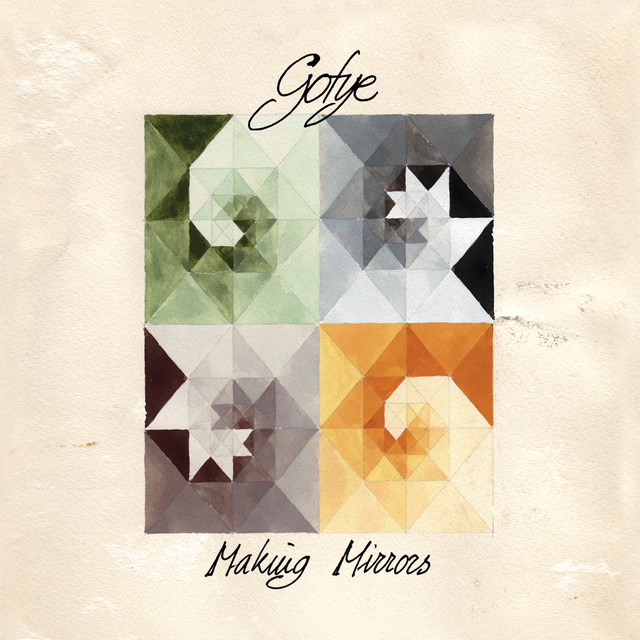 THE AUTHOR, DANGEROUSLY INTOXICATED AT AGE 26, HALLUCINATES SPEAKING TO THE AUTHOR, TWO YEARS CLEAN AT AGE 31, ABOUT, OF ALL THINGS, GOTYE

[The curtain rises on a small, suburban New Jersey bedroom. In many ways it resembles a teenager’s bedroom: the book cases are crammed with albums, CDs, DVDs, and books; musical instruments of varied vintage and worth line the room like mile markers—the borrowed $50 bass collects dust by the doorway while the polished, blonde-ash Telecaster sits aside a freshly made twin bed. This is, in fact, a teenager’s bedroom. The bald, bearded man sitting on it, laptop open, headphones on, record player spinning Sleater-Kinney’s One Beat (2002), was a teenager for quite a while in this room—in fact, well into his twenties. Now he’s 31, and while this may represent to the audience the pinnacle of boomerang generation loserdom, the audience has no way of knowing that the scene represents a tremendous improvement—no way of knowing, for example, that little over two years ago the book case (and his car trunk, his couch cushions, his guitar cases, and his pillows) held an impressive collection of empty pint containers of Laird’s vodka; no way of knowing that, while $22k a year may not be something to write home about (a condition not helped by a still-unhealthy spending habit of someone making $220k), it’s getting some bills and debts paid a lot better than making $9k at a café that either never notices how wasted he gets on shift, or doesn’t care; no way of knowing that the simple actions of paying his bills, going to work on time, even making the fucking bed, are wholly new developments in his life.

Neither does his young companion, another bearded, not-as-severely-balding person with glasses, swaying dangerously next to the new dresser. He’s slimmer, and he has a few more teeth; he is also spilling whiskey all over himself (here the author has to confess his memory is, understandably, blurry: this may have been during the gin phase, or the sheer insanity that was the tequila phase—although, since the 26-year-old Christopher has his clothes on, the latter appears unlikely), aghast that the premise which made up so many of his reviews—that of the time travelling teenager, yanked from this very bedroom to discuss the merits of Thurston Moore with his older, allegedly wiser self—has been thrust upon him, now travelling forward to confront his worst fear: 31 years old, paunchy, bald, single, bad neck, and in his old room.

Up to this point, both of them were having a good night, all things considered. 26 is the first to speak:]

31: Shit, YOU didn’t even make it up. You stole it from Clay, remember? Man, even your hallucinations are second-hand and mediated.

31: Sure, I guess so. Have a seat. I actually was just thinking about you.

31: Oh, knock it off, will you? Just sit down. Have some water. I was thinking about you because…you know Gotye, right?

26: [Tries to navigate the chair; winds up lying face up on the ground] Oh, yeah, that Australian dude Newell is into? He’s okay. I like that one song quite a bit.

26: Uh, sure, it’s like…[hums something vaguely consonant and quick for a few seconds] …and then after a while it goes like [makes low undulating sound]…I think. I’d have to listen to it again, to be honest, I’m pretty…I’m pretty wasted right now.

31: Ya don’t say? Well, that’s about as far as I can remember it, too. I had actually forgotten the dude’s existence until it was pointed out to me that this song that’s all over the radio is by the same dude.

26: Oh, what, he changed his name? That’s a good idea. I wish I could change…everything.

31: Yes, I know, fine, great. Except no, he didn’t. Same Gotye. I actually completely forgot that once upon a time he was No Big Hair‘d with a single I sort of dug. I mean, it was totally wiped from memory. Maybe it’s all of the brain cells we threw up in the Brotherhood?

26: Oh, yeah. That reminds me, you want something? [Hands 31 a mostly empty 20oz soda bottle filled with a clear blue liquid]

31: Oh my God, that’s right, it was the 151, peppermint schnapps, and blue Gatorade phase. Because apparently Listerine was beneath us…uh, no thanks, man.

26: OH! [Attempts to mock 31 with a hoity-toity posture, but instead just looks like a drunken window washer with no towels]

31: Look: so apparently homeboy is a big deal in Australia, and it seems like he’s the most popular dude in the multiverse right now with this kind of Sting-esque song called “Somebody That I Used to Know,” and it just came out of nowhere to become this international phenomenon. There are all these viral videos covering it, etc. Like, a zillion people paid to legally download this song, which is kind of baffling considering that all you have to do is turn the goddamn radio on and wait fifteen minutes.

26: Well…okay. [He pauses; he may or may not have fallen asleep, but he opens his eyes] Gotye, huh? Word?

31: Yeah, sure. [Turns the laptop toward 26, with the Spotify window open]

[They do so. Four minutes elapses.]

26: Um. That was…not bad. I definitely get that it’s catchy, but the song is a little underdeveloped, don’t you think? I mean it’s mostly just two chords, with the woman’s part thrown in. It has a nice groove. Good production, which I remember from the other record. The song isn’t terrible or anything. But…a million people downloaded this?

31: Or streamed it, or some variant thereof. Yeah, it’s strange, right?

31: That’s sort of the thing: nothing. I don’t really know what could feasibly rival it for popularity. The number one song in the country is technically this dumb thing called “Fun,” which sounds like someone put an old Harry Chapin song on a computer and pressed a “Kanye West-izer” button. If I heard this song before looking it up just now, I don’t remember it.

31: Oh, you. But I mean, not exactly stiff competition, which might explain why this song has captured the popular imagination. Or maybe this it’s just that plurality passes for popularity now?

26: You’re asking me? I’m the one with questions…um…does anything happen with me and Kimberly?

31: Oh brother; no, and it saves your life. Wait, has the bonfire incident happened yet?

26: I don’t know? The hoe down just happened? Do you remember that?

26: Thanks, officer. So wait, do I have to review this thing? Am I going back to 2006 to tell Scott that actually all the shit I’ve been making up is…I mean, wait…I got lost.

31: No, don’t worry, I’m reviewing it, in the present. I have to work tomorrow, but what the hell, right?

26: Okay. Hey, are you going to listen to the rest of the album?

[31 sits in stony silence. He plays the album. About forty minutes elapses.]

26: Granted I have the spins right now, but that was sort of confusing.

31: No, that album was all over the place. You have that moody couplet that kicks off the album, and it’s a reasonable segue into “Somebody,” but then it goes for another pop single, and then it goes into sort of ostentatious production pieces pretty quickly and then there’s that Motown tribute and that one song that sounds like Neil Young invited Burning Spear to play on Trans (1982). It’s basically a mess. Wally De Backer has a pretty generous vocal range, but I think he mistakes those McCartneyian vertical leaps for an actual melody. He has a pretty good ear as far as production goes, and if this wasn’t so clearly designed as a pop-auteur album, this would be a success as ear candy. But it is supposed to have songs, and Making Mirrors has some lousy ones. The closer is okay, I guess, but aside from the big single, nothing else on here really sticks. So the production, rather than highlighting good ideas, just masks some weak ones.

26: It’s basically a boring record with one really good song. Just like the one that just came out?

26: You’re sure this is my hallucination? How do you know it’s not yours?

31: Man, you haven’t even gotten to the bonfire yet, let alone the three-and-a-half years after that. I have no idea how it is that I’m here. It makes a lot more sense if you made up the whole thing.

31: No. No Kimberly. God, you know Kate is twenty times the woman she is…

[Suddenly a phone rings and the light goes black on 31. 26 is startled to find himself asleep on the floor, and lights come up on some beer bottles surrounding him. He answers, tentatively.]

[The lights slowly come back up on 31, still tapping on his laptop. As the conversation between 26 and Dom fades to murmurs, Christopher’s Mom, aka HNIC (HEAD NAGGER IN CHARGE), walks in.]

HNIC: Hey Chris, you know I don’t like reminding you, but your rent is overdue.

HNIC: [Sighs] Who were you talking to? Just now?

31: [Opens his mouth, lets it hang for a second. His gaze meets his mother’s. He closes his mouth.] Just…an old friend in trouble. Someone I used to know, I guess. But he’ll be alright.