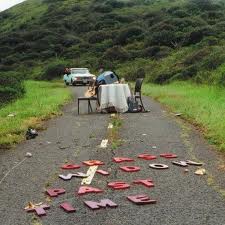 There is a way of pinpointing, with almost mathematical precision, the saturation point of a trend: it’s the moment at which old things that were once widespread, universal givens start sounding refreshingly new again. I’d like to think that we’re nearing this point in this whole shitgaze clusterfuck (we’re at least past the stage of christening it with a truly nauseating moniker, so we’ve gotta be close, right?) because my first thought upon hearing Grass Widow’s excellent debut LP was “songs that make definitive use of the contrast between quietness and loudness—how novel.” The worst of these bands have—right now, it bears repeating—such a pained and oblique relationship with melody, not so much embraced as awkwardly half-hugged, that when it is present it’s caked indiscriminately in fuzz thicker than the gunk at the bottom of that lasagna pan that’s been sitting in your sink for three days. So here come San Francisco’s Grass Widow, a band unafraid to dip into moments of lush quiet before unleashing mid-song post-punk assaults; a band with a fresh DIY aesthetic that we don’t have to call “shitgaze”; a band whose songs are so intricate and just plain good that, mercifully, they haven’t felt the need to coat them in lo-fi grease. Their self-titled debut album is not just a breath of crystalline air, it is that gust of chilled wind that swirls in, snowflakes and all, on the heels of a guest arriving to a sporadically fun but otherwise sort of stuffy party.

Grass Widow’s LP alludes to all the MVPs of female-fronted late ‘70s punk: in the Slits’ fractured, wispy group vocal harmonies; in X-Ray Spex’s unexpected bursts of brass (not so much swagger as literal, physical brass; here it’s a trumpet); and, most directly, in the Raincoats’ ability to sound simultaneously bouncy and ominous, in the way that a building must sound ominous a few seconds before it topples. Grass Widow are, though, more than just a paint-by-numbers homage to their influences. While these previously mentioned touchstones were driven by the vocals of singular, over-the-top personalities like Ari Up and Ana da Silva, Grass Widow specialize in breathy, whimsical three-part harmonies that aren’t so much compositional centerpieces as they are additional elements in the band’s unique soundscape. “Green Screen” begins with a moment of serenity—the girls’ ethereal harmonies, unaccompanied—before it’s gradually interrupted by a number of boisterous, competing layers: crashing drums, an angular riff, and energetic background shouts. The terrific lead-off track, “To Where,” is an even more exuberant affair, driven by a guitar arrangement equal parts post-punk and surf rock.

Grass Widow—again, like the Raincoats—have a wonderful sense of dynamism. They don’t write songs that are uniformly hard and fast, just full of structural surprises, speeding up, slowing down, regaining their breath, then sprinting forth even jauntier than before. The arresting “Out of Body Experience,” perhaps the best song they’ve got so far, is a perfect three-minute distillation of everything that’s great about this band. It begins with a slow, unassuming riff, and then, clamorously and unexpectedly, as though someone had suddenly opened a closet overstuffed with drums, it explodes into controlled chaos. Moments later, the crash subsides and a haunting voice comes to the fore. On the verge of tranquility, somebody opens the closet door again.

Their EP, also, cleverly, self-titled and released a few months after the full-length, is another simple success, particularly with the catchy “Tattoo” and “Thirsty Again,” which can both be streamed on the band’s MySpace, but it doesn’t quite capture the variety or buoyant energy the LP boasts so thoroughly. Either way, 2009 has been a year of prolific and impressive output from Grass Widow, and what with the torrent of bands popularized by the tactics Grass Widow nails to the wall better and more interestingly, a wider audience shouldn’t be that far behind. They’re certainly deserving of one, and given a little more focus and wider ambitions, I think they’re capable of making the truly great record this LP almost was.