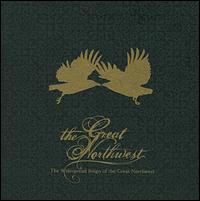 The Widespread Reign of The Great Northwest

There’s nothing too remarkable about the Great Northwest on the surface—they’re from Portland and they look like your average band of slightly aging indie rockers who’ve already been in a go-nowhere band or two. Even their album art and band name are the sort of familiar, slightly generic labels that anybody with a few marketing dollars saved up from a day job could throw into the local scene. And in actuality, that’s what they are, set apart only by a shared member or two with the Dandy Warhols, an odd association that might give one rather low expectations for the album itself.

Then, of course, there’s the music. Most songs are built on unassuming guitar lines, repeated deliberately, which slowly build into shoegazer symphonies of coolly muffled vocal lines, glockenspiel accents and loose Krautrock-like rhythm sections. While if not in the right state of mind this formula can wear thin, at its best there are transcendent moments of layered bliss, of notes interlocking in exactly the right way to elicit an emotional reaction.

In this way they evoke bands like Boards of Canada or My Bloody Valentine, who work in a pop structured context without relying on lyrics to help guide the listener. But the pure reliance on strategic layering is what provides both their singular success and their occasional downfall. At the beginning of the album, the epic build of a song like “Chief John” or “Reverie” is enough to give one chills, but the acoustic muddle of the last few fail to elicit much of a reaction.