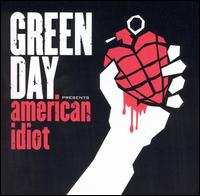 Tweet
Let me get this much out of the way before I begin: for my ninth birthday, my parents gave me a Boom Box, my first ever CD player, and with it, a copy of Green Day’s Dookie (1994), my first ever record of any kind. I cannot remember ever loving anything as intensely as I loved that album, from the time I first ripped through the cellophane until I was well into my pre-teen years. While the anthems of disaffection and odes to masturbation didn’t exactly translate to the ears of a pre-pubescent third-grader, it is the one album I can point to as the catalyst to my fanatical love of pop music, and for that reason it is impossible for me to ever approach a Green Day album with any measure of objectivity.

It’s not as if I’d pretend they’re the greatest band in the world; looking back ten years, most of Dookie’s singles are still as infectious as ever, but, in hindsight, a tad innocuous and redundant. Billie Joe Armstrong has, to this point, built a career on playing the same song over and over again, and attempts to branch out have, to this point, been either middling (see half of 2000’s Warning) or awful enough to qualify as war crimes (see 1997’s “Good Riddance (Time of Your Life)). And after four years of relative silence that have had them all but written off, no one in their right mind could ever have anticipated a comeback as expansive, mature and sporadically brilliant as American Idiot, the band’s politically and socially-charged “punk rock opera” that, in an hour, attempts to encapsulate the anguish, isolation, anger and paranoia of 21st Century living. No, I’m serious. Wipe that smirk off your face.

It’s interesting, if not especially surprising, to find that American Idiot is less a “political” album than an attempt at a macro-scale social criticism through the same tales of everyday disenfranchisement that Armstrong’s been spinning for well over a decade. Indeed, he wants to be the Springsteen of suburbia, and it’s a given that he occasionally bites off more than he can chew. When he does take overt shots at Dubya, they usually fall flat: lyrics like “Zeig Heil to the President gasman / Bombs away is your punishment / Pulverize the Eiffel Towers / Who criticize your government” don’t reach much further than the standard “fuck Bush” rhetoric found in the diary of any fifteen year-old who’s seen a Michael Moore film. Far more effective is “Extraordinary Girl's" mention of “a child left behind” demonstrates the kind of nuance Armstrong is capable of but rarely willing to exercise. On the whole, though, his sympathy for the cast of characters that populate the album is palpable, and helps make American Idiot his most cohesive set of lyrics, even if the clumsy narrative he attempts to string through their stories fails to gel.

But if the forced lyrical growth is a little stunted, it’s more than made up for by the band’s newfound sonic ambitions. American Idiot is far more musically exploratory than a Green Day record has any right to be, but the real shock is just how few of the album’s experiments fall flat. Two nine-minute suites bookend the album, the first of which (“Jesus of Suburbia”) may qualify as their greatest achievement to date. Covering everything from tuneless gutter punk to piano balladry to a melody curiously reminiscent of Bryan Adams’ “Summer of ’69,” it jumps joyously through its five sections, never once sounding strained or inorganic. Later, “Are We the Waiting,” an excellent down-tempo torch song with a shouted-in-unison chorus achieves a kind of mournful resonance unseen in any of the band’s previous work, and “Give Me Novacaine” builds upon the minor-key flirtations of Warning, making them feel far more natural and confident. These, paired with a few excellent Green Day by-numbers tracks (“American Idiot,” “She’s a Rebel,” “Holiday”) make American Idiot the perfect kind of comeback record: one that moves forward, but also reasserts what made the band great in the first place.

American Idiot is far from perfect. The second of the album’s suites, “Homecoming,” moves much more awkwardly than the first, and features a pair of dreadful sections penned by the band’s two other members. As well, Rob Cavallo’s glossy production restricts the band on their more ambitious numbers, making the music sound more derivative and simplistic than it actually is. But the album is such a pleasant surprise that these, as well as the lyrical shortcomings, are easily forgiven. A decade after their commercial zenith and three years after having been all but forgotten, Green Day have created their magnum opus, and the nine year-old in me is eager to spin it again.