Other Records by Greenhouse Effect 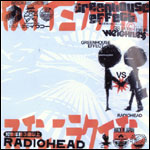 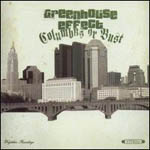 Tweet
Columbus or Bust begins with a clip from The Crow, Michael Wincott's Top Dollar rasping, "A man has an idea. The idea attracts others, like-minded. The idea expands. The idea becomes an institution. What was the idea? That's what's been bothering me, boys. I tell ya: when I used to think of the idea itself, it put a big ol' smile on my face. Greed is for amateurs. Disorder. Chaos. Anarchy. Now that's fun!" What exactly are Greenhouse Effect saying with this appropriated movie quote? That the greed of hip-hop's juvenile and short-sighted, that the founding principle's "disorder" and "chaos" and "anarchy"... or more simply, to have fun and stir shit up? Columbus or Bust seems all too content to do those two things offhandedly, though, or its intent's blurred by a lack of focused song concepts.

Fortunately, half the songs have beats hot enough to distract. Blueprint's a phenomenal production talent, and while his work here's not as stylistically varied nor as consistently good as it is on 1988 (2005) or Celestial Clockwork (2004), haters need to hesitate and give opening track "Ground Zero" a couple listens. Manifest (aka Fess), the other half of Greenhouse Effect, kicks things off with the first verse, his flow a more tame version of Blueprint's, his lyrics not quite as sharp. In short, hypothetically elevate Blueprint a couple miles to Pharoahe Monch standing, and Fess would be the Prince Po. Both drop a hodge-podge of decent brag and battle lines that don't really seem to cohere to much outside of "we're ill," and this generality undermines the intensity of the rapping for the next three songs. Just listen to those instrumentals, though.

Warbling bass orbits around the kind of clicking drum nucleus that's becoming Printesque, a style that also includes the kind of precision sound strikes found here: a binary key, a synth tone, a cool effect and a minimal arrangement of harmonic horn blasts. After "Ground Zero" Blueprint riffs off Mobb Deep's "Shook Ones" with "Still Shook," but "oh man" to the stretched cymbal flourish and the way the Meg Whitey drum and "Shook" sample sit down for the lady singing, "Another rooster's hen." Print's in familiar territory with the amp buzz and overlapping keys on "Watch" before the title track slows down the pace and ends up sounding more Houston than Columbus. "E-Thugs" shows Print's ability to tweak a seemingly unworkable sample by sustaining just the right part, and the subject matter takes a turn for the better with Print and Fess focusing their attacks on web goons: "You want us to think you tougher than you are / You ain't hard, you downloadin' avatars."

As the lyrics improve, though, the production hits a small dip. "They Listen to This" features Murs and a mighty percussive vibe (thanks to Hi-Tek?), but it also has a synthetic flute melody on the hook that sounds like porn in Sherwood Forest. Print asks a bit too much of his stuttering guitar chop in its carrying of the beat for origins-story "Square One," but "The Street Theme" and "It's Only Life" are the real disappointments, both bogged down by music that drags its ass behind recycled lyrics; the former references Nas' "Thief's Theme," and the latter's basically a sedated and much inferior remix of the fiery "Yo Yo" off Blueprint's excellent Vitamins and Minerals EP (2004).

The late second-half comeback starts with the smooth groove of "Bad Girl," its expert use of guitar, organ, horns and some beautiful bass making it the finest in the funkier side of Print's repertoire (the side that includes the likes of "Birthright" and "Big Girls Need Love, Too"). It's strangely followed by the Tau Ceti music box and marching monkey drum of "You Must Learn," clammy claps and a wisp of vox making Jacob Marleys of Fess, Print and Jakki, their personal-political tirades clad with pieces of delay chain.

Unfortunately, maudlin strings overrun the beat on "Will Not Lose," and "What's It All About" loses the claim of "good closer" with a dull, cadence-stuck hook that takes up too much of the track time. Outside of these nitty flaws, though, the most dissapointing thing about Greenhouse's latest is that it's just not as firm in its purpose nor as creatively diverse in its presentation as the best releases from the Weightless crew, and a rather loose lyrical approach renders a few of the songs borderline generic in terms of content. There's a hint of weariness, a slight arthritic ache that sloops the edges of Columbus or Bust. When the album starts again, it invites a different look at its Top Dollar introduction; maybe Greenhouse Effect struggle to remember the joy of "the idea" that motivates them.

On "Square One" Blueprint raps: "...Back / When you was dreaming 'bout rhyming / I was grinding / Selling Greenhouse tapes in Columbus / You got ten dollars, then holler at me / So I can hop this Greyhound bus back to the 'Nati / We used to rock shows in Dayton with Bahdaddy / And if we made our gas money back, then I was happy / It was me, Ill, Inkwell and Manifest / This was before I started building with Plead the 5th / Before Soul Position, Orphanage or the Iskabibbles / Back when everything about hip-hop was simple."