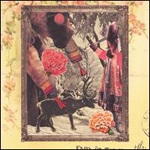 The booklet for this album is all in Russian, but apparently there’s a story this wonderful music soundtracks. The title is something about axes and porridge; the music sounds like Alexey Devayanin traveling from his native Siberia to Moscow. There’s something about flying, smiling-yet-mutilated dolls and faces, a stag, birds, flowers, and collage work. This is what I gather from Google, the visuals in the artwork, and what it sounds like, which is some wicked combination of Philip Jeck and Mort Feldman and Max Richter and.it’s like somebody took all of the eking tactics that Jeck and his ilk apply to found sounds to evoke emotion and decided to apply it to actual music. In that sense it bears more resemblance to the work of Christian Fennesz, but only in process. Whereas Fennesz aims for the future, Devayanin is focusing on folk music.

There’s something maddening about this album, too. I’m fascinated each and every time I listen to it, like there’s going to be a point where it suddenly morphs from the album it is into some insane prog workout. And I mean that as a compliment—there’s nothing lacking here so much as there’s this overwhelming sense of tension that threatens to explode at any moment. That it doesn’t, or at least it only does in ways that are counterintuitive to the feelings it evokes, is kind of like watching a phenomenal actor completely subvert familiar scenarios. And that’s in part because, language-wise, Devayanin has got drama down pat. It’s rare that a such a severe sounding album can still play with humor, but Kasha Iz Topora finds brilliant moments of humanity beneath a glaze of dread and a sound palette that manages to sit wild distortion, synths, and traditional folk comfortably next to one another. Maybe the best way to describe the album is Beirut produced by Wendy Carlos and Faust in unison.

The 18 tracks cover a lot of ground. “Propolis” is a gorgeous piano solo cut with thick bass and seething static. “Begushemu Vpered” is a string quartet collapsed against the blacksmith’s forge. “Samouchitel” is a fog of electric and acoustic guitars, some reversed, over the sounds of marching feet. “Garga” is a spate of percussion that evokes Edgar Varése’s “Ionization” and Jeck’s work on Stoke (2002) at the same time. “Potemnelo” features, I shit you not, steel drums. “Izbushka” strangles the Books into a creepy space walk theme. Much of this material is ambient and more interested in tone that it is rhythm or structure. That the album opens with its most straightforward track, “Po Derevne,” may seem off-putting, then, given that the strict acoustic strums and melodic lead, gorgeous on their own, never really see a follow-up as we dive further into this collage-driven sound. The effect, though, works pretty well. It sets up a variety of false expectations that are gratified in entirely different ways: the rhythm is parsed by “Slovami Poeta,” a wash of stilted strings and resonated percussion; the emphasis on melody returns in “Kuraga” and “Jubga,” seeming mirror images of each other in that the latter sounds like an inverted version of the former; and “Votpusk,” like many of the tracks here, tends to tease us with the idea that we’ll get a snatch of that opening, straightforward thunder every time its horns seem about to play something tangible.

The album ends at its most ferocious. “Vechnost” cuts synth waves with serialist piano and highly manipulated vocal samples while somebody on a kit spends the entire track threatening to unleash. As strings and rides enter the mix, the track gets more tense until suddenly all the energy is sucked out for a brief moment; the nauseating build returns even more forceful, accordions joining the elliptical centrifuge of folk art and high art, but the explosion never comes. We fade out, slowly, into “Arrial—Farewell Again (GA Remake),” a pulsing waft of pretty, ominous tones that provides the rhythmic resolution we’ve hoped for in a way that doesn’t really do that at all. And throughout, stray percussion noises and quirky passing riffs hint we’re being played with, that there is life beneath this sheen of dread, and that every little second here was pored over. This album is staggering in its complexity without ever jumping out at you. That’s why the shadows are always more scary than the reality, right?