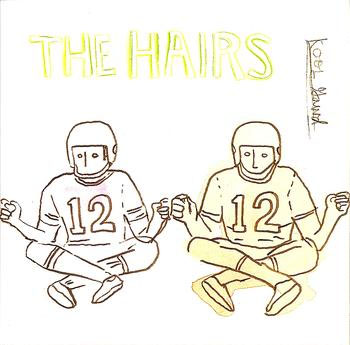 With my interest in balls-out pop waxing and waning in its own erratic tide, the scores of tender-faced Brooklyn twee-pop releases are a difficult lot to sift through, to even desire to sift through. Perhaps it’s the way I envision so many of them, with their garrulous lyrics, unyielding chipperness and rapturously deployed alt-percussion, are seeking to usurp my mood—to strong-arm my brain into a more gleeful place than it is truly feelin’ at the moment.

When I deign to sift, it is one of those “much sweat: little reward reaped” ratios that often comes with things like…sewing or the search for the perfect cheap, 2am taco, or finding something awesome from Datpiff. (I think maybe only “sewing” on that list isn’t worth it?) Pawing through the copious selection of Brooklyn pop can similarly serve to do little other than frustrate, pump up my wince muscles and oftentimes just results in my giving up and grinding through a highly reactionary round of Throbbing Gristle on Spotify while dreaming of setting fire to xylophones like all the kingdom’s spinning wheels in that Sleeping Beauty scene.

Had it not been for charmingly muted and oddball track “Bury the Hatchet, Chainsaw, and What Ever Else You Got,” followed by a helping of singles “Houseplant Song” and “Balding College Girls” being handed to me on a silver platter, over Turntable.fm, I would have doubtless let this band pass me by. While a fair bulk of pop outfits hide behind less egregiously sugar-coated titles, the Hairs are conversely a more or less casual ensemble immersed in verbiage that makes my brain wont to wither like a snail dropped in saltwater.

Pre-emptive to the release of new EP this month I Have Been Working Out, Kool Gawd released on MagicMarkerRecords is an EP that is both subtle in its dimple-sprouting adorability and so affably at ease with its own twee-ish posits, the unavoidable titular titling (“Scabies Babies,” “Cool God,” and most obviously “Duh! x 12”) that its deceptive calyxes of, well, titles like “Duh! x 12,” deflect from the refreshingly casual momentum of the songs—and an equally refreshing absence of xylophones.

A peachy morsel of light-handed polite rock, this airy brush of easiness accompanying the three tracks and lolling instrumental “Frontman Fragility”: it is Matador, circa early ’90s; it is the cheery cheek of Belle & Sebastian; it is less cloying Bishop Allen in its simple-pleasues, simple-songs focus. With Alex Naidus’ (Pains of Being Pure at Heart) basslines strolling through frontman Kevin Alvir’s casual, glassy-eyed strumming and notebook doodling sentimentality. Often revolving around vague nods to juvenile turns of mood, the lyrics are not so specific or strictly juvenile that they alienate—even while “Scabies Babies” treads this line very closely, it caps itself off with lines like “sorry I was so mean,” confessed in the same shrugging mutter I usually invoke with “sorry, I’m an asshole today.” They’re songs where houses burn down, bad things happen, and you admit to being a shitty person on occasion.

While polite enough to be decidedly conducive to Saturday morning listening over early-weekend optimism and cereal, it’s material that’s just as comfortable loafing around in the atmosphere as I drink beer and read bad sci-fi in the bathtub. The downplay of vocals, the informal production, and unassuming demeanor instead does just exactly what I want from pop: get a hook lodged in my brain and make me comfortable enough that my mood levitates on its own good time, and of its own volition.