1. Earth Outside Of Ghost Will Only Be Quicksand


2. Tongues That Possess The Earth Instead
3. Foot On The Brake
4. A Suit Of Clouds To Ride The Skies
5. Praise Awaits You
6. Rise To The Heavens On Evaporation
7. A Picnic Few Want To Attend
8. In You Now, But Still Below
9. Eyes Peeled
10. You Wouldn’t Embarrass Me, Would You?
11. You’ve Been Faithful To Us Clouds
12. Skip The Rope
13. Celebrating Hearts Aligned
14. They’re Bad, But We’re Worse
15. A Bed That Breathes With Him
16. Feed Your Sheep A Burning Lamp
17. Rainbow = Warbow
18. A Tree Replanted Back In Eden
19. Place Your Wind Against My Sails 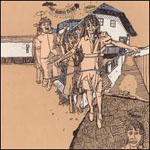 As unpaid Suzuki spokesmusician, Tennessee’s John Ringhofer is a believer: in terseness, in Jesus, in Nature, in unabashed pop, in multitracked falsetto, in Van Dyke Parks lyrics, in diatonic button/wind-powered instruments, in moisture, in attributing cowboy skills to God, and in sandals, probably. As Illinoisemaking trombonist, Ringhofer takes cues from his much more popular and richer bandleader, making ingenious arrangements seem effortless and natural. As evangelist, Half-handed Cloud maintains enough honesty and thematic depth to come off more endearing than confrontational. Jus’luvin’ the J-Man…

But HHC distances itself from its Sounds Familyre and Asthmatic Kitty labelmate through a devoted and exclusive focus on, as Ringhofer sings, “praisetalk.” Sufjan’s managed to garner a major hype-chubby from all manner of media outlets, even with a vein of Christianity throbbing along his most opaque or disturbing lyrics (which only really amount to some burning trees and a “clown rapist” as our Newell’s bluntly stated), mostly because of an extremely accessible swathe—or predictable sheen?—of epic instrumentation. And he tours with like a million people, his aspirations almost impossible to realize, developing an Everyman bigness and charm inconsistent with the extreme individuality of his songs’ characters. As it is, Sufjan can’t really afford to be so explicit with the religion stuff.

John Ringhofer can, although his method is the opposite of Sufjan’s while still being counterintuitive. Half-handed Cloud’s fourth album, Halos & Lassos, is delicate and tiny, tinny beats peppered between wispy bleats of Melodion and Omnichord. In fact, the Omnichord, an obsolete product from Suzuki (whose modern manifestation is the Q-Chord) with a beatmaker and pressure pad, is the most prominent instrument in Cloud’s cache, painting the album’s space in warm, synthetic murmurs. On its own, the instrument would perfectly compliment Ringhofer’s frail but steady voice; the thinness of the technology lends an extra coloring of alienation to HHC’s Elliott Smith vocal stylings, which may sound alienating only as a product of nostalgia for the lost artist, but the comparisons are more than apt. Yet, even when tracks like tidy opener “Earth Outside Of Ghost Will Only Be Quicksand” or the juicy “Foot On the Brake” add a real-live drum kit, or even when “Praise Awaits You” rides on acoustic rails or “Eyes Peeled” injects damp bass clarinet, the Omnichord defines the album. Clocking in at 29 minutes, Halos & Lassos turns out to be as small, economic, and archaic as it ostensibly sounds.

Which is strange when you consider Ringhofer’s subject matter, a belabored but essential character of Half-handed Cloud’s persona. He sings in massive strokes, covering the majesty of God with equally obtuse phrases, bundling his lyrical ditties with the titular concept. “That’s not a halo, that’s a lasso / Since You tell the truth,” he coos in “Rise To The Heavens On Evaporation,” later describing God’s infinite closeness to His Creation as a “snare.” The conceit is pretty neat, especially in imagining a constant and indelible tug-o-war between God and person, always allowing for God’s relinquishing of control. Ringhofer’s an eloquent lyricist, if a bit juvenile due to rainbow optimism, but too often his faith translates into obstinance. “Tongues That Possess The Earth Instead” and “A Bed That Breathes With Him” lump “unbelievers” into an incomprehensible “Other” category, offering no alternative or real explanation of dogma to those not in the fold. As an “unbeliever,” I want to be accepted, I want that joy, and Love, and I want my “dreams restored.” I want to see the unending grandeur in Nature. But for all of Ringhofer’s enthusiasm and unerring faith, his “praisetalk” becomes exactly what “praisetalk” has become in most Contemporary Christian Music: hopelessly vague and shallow. You either know and believe, or you’re damned.

Really, Half-handed Cloud’s arrangements just don’t match the grandiosity of its lyrics. Ringhofer’s an antsy and gifted musician, often too addled with ideas for his own good, but each notion pops and escapes before registering as anything more than whimsy. Over the course of “You’ve Been Faithful To Us Clouds,” the only song to reach three minutes, and really one of the few tracks to feel complete, harmonies crow in beautiful simplicity, a Casio keyboard chortles, little bells shake, and the Omnichord is joined by a fart-ier Melodion. Was that an actual cymbal crash? On other cuts, banjos, dobros, horns, and handclaps aid the fray, but even with variety, the mixing is stultifyingly thin. So, Halos begins to recede, from the Throne, from the clouds, from the hills, from the streets, into the rent-free basement bedroom of the local church where Ringhofer prays. The album is tiny, never suffocating, but minute in the scope of its sound, in the parceling of its instruments. Backing the “praisetalk,” that big fat Universe of Absolute Ideas, the music’s diminutive effect is an anomaly, and damned refreshing at that.

So, Ringhofer’s a stubborn guy. At least he sounds like he’s smiling when he labels me and my heathen ilk as enemies, and his spiritual devotion, plus his secular popularity, speak loads ‘bout his versatility and talent. But his tunes, while engaging and melodically efficient, never warrant the firmament of his faith, and the void between the two could predictably exclude a huge potential fanbase.

Maybe I should relax. Not take this personally, if that’s what I seem to be doing. Then again, raping a clown shouldn’t be taken lightly, either.