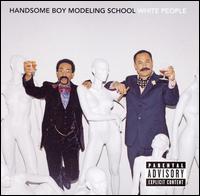 Here at the Handsome Boy Modeling School, your image is your face is your friends is your life. We have beauty in the steps, in the lips, in the threads; you will be the chic all over the street; all the peoples will look at you and nod and murmur sweet nothings to the air you pass through, you little darling. This is our objective at Handsome Boy Modeling School, and you will know nothing else. You will be immersed in all the metropolitan styles; it will ensconce you like a cultural mousse of rich chocolate. You will be delicious!

It hurts to say it, no, it causes little friggin’ fork stabs of pain to traipse down my tongue and larynx, but my favorite track on Handsome Boy Modeling School’s White People is “Breakdown,” the track that features none other than, um, Jack Johnson. Shit. I confess and beg absolution. The piano notes and the squeezed fat opera woman, the scratches and the whistling, the damn egg shaker percussion, and Jack Johnson’s best Damon impersonation… I just can’t say no. I can’t say no.

Wholeness and integrity are things that don’t exist in the modern state of man. We are disparate elements of materialism and Freudian psychology and a hierarchy of needs struggling to find some spiritual or philosophical way to come together, but that quest is impossible and foolish and such a bore. Exist in glorious, decadent excess and make it your beauty. Focus all your efforts on simply becoming a model upon which all may pin labels of adoration. Image and style are the most universal standards of social appeal; only through the pursuit of them can you become everything to everyone, and only through becoming everything to everyone can you become anything to yourself. Handsome Boy Modeling will make this your reality.

Damn, and my second favorite track on White People is probably “Greatest Mistake,” featuring John Oates and Jamie Cullum, which is sort of pathetic when you think about it. It’s not that production whizzes Prince Paul and Dan the Automator have completely lost it; it’s just that they seem to have haphazardly thrown together a collections of skits and singles with about as much rhyme and reason as Sole on barbiturates or the middle section of Gilliam’s Fear and Loathing in Las Vegas adaptation. Indeed, White People could very easily be called the sound of Prince Paul and Dan Nakamura playing Duke and Dr. Gonzo with their eclectic cast of cameos in psychedelic tow: Chan Marshall, RZA, Bixler from Mars Volta, Lord Finesse, Dres of Black Sheep, that Franz Ferdinand guy, Mike Patton, Tim Meadows shooting his “Ladies Man” shtick all over the place, hell, where’s Master P’s mom?

Polish your nails into a brilliance that shadows the sun! Curl and lotion your hair until its waves are strong enough to erode the stoniest of hearts! Practice that accent! Affectation of status and popularity shows desire; what you desire most, you will have… with the help of white people and the Handsome Boy Modeling School, of course.

Sure, the album contains at least half a dozen solid tracks, but I should be careful lest I cast the impression that this motley crew of material makes for one wild, zany ride. Even the most daring songs here are glossy and safe enough to chart on the billboards for their respective genres; White People puffs its chest boldly only in its apparent contempt for cohesion and consistency. The schizophrenia on display here is not of the dramatic sort that intrigues or interests; it’s a very real disorder that befuddles and annoys the listener. Swinging with conceptual neglect and fashion wax, the Handsome Boy Modeling School’s latest attempt to cover all the bases flies apart at the seams.

We will blow you up, boy!