1. Cash Machine
2. Tied Up too Tight
3. Sick of it All
4. Seven Nation Army (White Stripes cover) 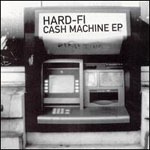 I know this because I’ve got it down in my diary:

‘ … Just saw Late Night with Jools Holland. Yes, I was that bored. But, come on, I only tuned in to see the Arcade Fire- surely that redeems me?! What? No- of course it does. Man, the Arcade Fire were… monumental. Pity they only did two songs- and wtf is up with not giving ample camera time to Régine? Stupid cameramen. Stupid program- what was that band called? Hard-fi?’

Ahh, yes; the start of another beautiful friendship.

I think I’ve found my new mantra! I could say that into Microsoft sound recorder, echo it to the max, and superimpose the sound of a wilderbeast farting and I’d get something more enjoyable than this EP. This isn’t a joke. I’m not trying to be funny --- go ahead and try it yourself.

The Cash Machine EP is meant to act as the precursor to the imminent full length Stars of CCTV, and I’m using the word ‘meant’ in the loosest sense here, because, really, this EP means nothing. It speaks with vacuum, not volume.

No, this isn’t the sound of ‘urban London’, ‘cool Britannia’ or ‘The Streets’ – the material on offer is of the standard of a Robbie Williams B-side. I swear the melody on the title – track is pilfered from N’Sync, for crissakes!

The whole thing stinks of a cynical, and crude, attempt to exploit, and entertain every populist styles, meshing the totality into this… this thing. You have the forced ennui (Check: Strokes fans), neon-lit mega cliché riffs (Check: radio friendly), dub (Check: crosses the multi-ethnic divide) and lyrics that deal with tough teenage issues (Check: Feigns sincerity):

And did I mention the cover of “Seven Nation Army”?!! Where the original had a sultry, cocksure demeanour, Hard-Fi’s "interpretation," if you could call it that, is to anaesthetise the pace, then dousing the slug with dollops of dub echo, car horns and various inconsequential atmospherics. Unsurprisingly, the whole thing is unbelievably annoying. That’s not a colloquialism. Imagine you’ve gone to the best Lebanese restaurant in town --- with Sarah Michelle Gellar --- and… instead of dealing the a sizzling mixed grill, they serve up steaming skewers of shit. Hold that image; Hard-Fi’s music is more repulsive.

The best bands set out with an innate spark of creativity, they force their own paths, bending the rules until they don’t matter anymore, until listening to a man singing about a two headed boy transcends entertainment, until, for those few minutes, nothing feels more important or more right. Hard-Fi function within the paradigms of blithering mediocrity; t he tunes, yes, are affable, but the sing-song delivery of faux urbanisms, and a botched production job act to alienate the listener. For a band obviously indebted to The Clash, there are clear lines drawn here between audience and band. If the whole world is, indeed, a stage, then one can’t help but feel that Hard-Fi are a minor ‘mise-en-abyme’, mangled messiahs to the misled masses.

So, with that in mind, repeat after me: