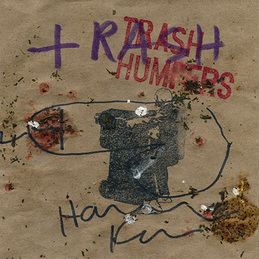 There’s an obvious power to using preexisting songs in movies—two supposedly fully formed works of art synchronized as if they were previously unfinished—and Harmony Korine’s movies, usually far from “synchronized,” are no exception: the use of Sleep in Gummo, Jim O’Rourke in julien donkey-boy, and A Silver Mount Zion in Mister Lonely all produced brief moments of transcendent movie-going. Trash Humpers, however, was always going to be different; more Dogme than his own Dogme movie, it’s a fetid, naturalistic waddle in filth that goes out of its way to prove how conservative Korine-haters are to not take even his mainstream work seriously.

And yet, the originality and downright musicality of the Humpers OST underscores the failure of that intention, if indeed it ever was one. Unlike Korine’s earlier musical effort, SSAB Songs (1999), produced in tandem with Brian DeGraw of Gang Gang Dance, Trash Humpers functions first and foremost as a spatially coherent soundtrack, and so is unable to reach SSAB’s heights of unlistenability. Whereas the earlier record proved how hard it is to use a big budget to make something both fundamentally deconstructed and musical, the Trash Humpers soundtrack, all of fifteen minutes on an overstuffed seven-inch, demonstrates that for music to be unconventional and usable, all one has to do is leave the mic on.

While the use of folk standard “Three Little Devils” and the various effects peppering the songs—babies crying, a music box, a man shouting, “Go to sleep, boy!”—may have strong developmental traces in the filmmaking process, they still seem off the cuff. This is Korine reaching for the heart of improvisation, reveling in the detritus of the unplanned and using visual inspiration as the locus of its coherency, which in turn colors and unifies the soundtrack’s seemingly disparate pieces. Opener “Trashy Torch Song Lullaby” is oddly reminiscent of Erykah Badu’s a cappella in New Amerykah Pt. 1 (2008), rendered even more imperious by the subsequent drum solo in “Rumble,” which itself is followed by the daycare-Cocorosie of “Night Time.” Just like his characters raping and pillaging the streets of Nashville, Korine is, for lack of a better phrase, all over the place.

While the six diegetic pieces which make up Side A provide quick, surprisingly tuneful bites of trash-humping life, the original Side B’s fanciful juxtapositions point towards new musical directions for Korine. Dominated by the five-minute “You Girls Juss Suck Large Fat Penis,” a My-Penis-Is-Made-of-Dogshit-indebted pitchshift monstrosity detailing oral sex habits over detuned guitar, it then ends abruptly with a hymn and a lullaby both courtesy of Harmony’s wife Rachel, whose rendition of “Hangman” in Mister Lonely was a highlight. Side B goes further than its predecessor in encapsulating Korine’s work—unflinching depravity accompanied by stunning grace notes—but, more importantly, as half of a soundtrack one could buy for $15 “hand-filthed” by Korine, it’s totally arresting music. Like in his films, the treacly and sentimental are abruptly offset by the extremely distasteful: both seem of a piece rather than jarringly at odds, lending the soundtrack completeness and symmetry.

The film itself has a special shitstained appeal, like Even Dwarves Started Small crystallized into something less explainable, more primal, way more disturbing. It’s unique enough that those invested in the future of cinema ought to have some respect for the balls and talent it took to film convincing, surveillance-style footage of the director and friends in old age makeup murdering, humping, and kidnapping their way across Nashville at dawn. And the soundtrack is a worthy companion piece: inspired bullshit as effectively ramshackle radicalism. Korine has always been testing the crusty boundaries of what’s bullshit and what isn’t—if one can find anything he does without an air of bullshit—and while the Trash Humpers OST may not represent as new a step in the form as its film does, it’s out on the Oregon Trail of weird shit without a clear precedent.