1. Elliott Gould is in California Split

11. Sometimes Friends
12. Do the Cavern
13. Jack and the Water Buffalo 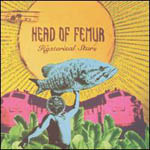 CHRISTOPHER CONDUCTS AN IMAGINARY CONVERSATION WITH HIS EX-ROOMMATE ABOUT THE NEW HEAD OF FEMUR ALBUM, UNTIL BOTH ARE SHOT TO DEATH BY NICK HORNBY
A play in one act by Christopher Alexander

The curtain rises and we see two young men in their early twenties enjoying iced soy-lattes outside a local coffee shop. CHRISTOPHER wears thick plastic glasses and sports a full beard, even though it's July. DAN is clean shaven and is a full ten inches taller than CHRISTOPHER. Both wear clothes purchased from a thrift store, and may be a little stoned. It is the middle of the afternoon.

CHRISTOPHER: You know who I think would really like the new Head of Femur record? Nick Hornby.

An image of HORNBY is projected behind them:

CHRISTOPHER: Yeah, there's a total Hour of Bewilderbeast vibe going on through the whole thing, and you know how he has a ten foot hard-on for Badly Drawn Boy.

DAN: Huh! Well, I don't hear it. I think that, seeing as the album is on Spin Art and all, it fits pretty comfortably in the Elephant Six mold. You know, Pet Sounds/Sgt. Pepper style instrumentation, British invasion songwriting, stupid band name, a record cover that looks like every Guided by Voices album ever. My first reaction is to label them an American counter-part to Architecture in Helsinki. He sips his latte. Hey, you should say that in your review!

CHRISTOPHER: He shakes his head. Uh-uh. If I said that, I'd get mail from every blogger and epinon.com junky saying that role was already filled by The Fiery Furnaces.

DAN: Oh. He appears confused. That doesn't make any sense.

CHRISTOPHER: It's the internet, it doesn't have to make sense. Anyway, I don't think you're wrong, but it still reminds me of Bewilderbeast. Think about it: both are pretty strong albums with remarkable songwriting, but I think at the end of the day the most salient thing both artists bring to their work is the quality of their record collection. Don't get me wrong, I really like it. On a song like "Elliott Gould Is in California Split," the band shifts from jangle pop to post-punk the way a Porsche shifts from second to third gear: indetectible. Trust me, I'm favorably impressed.

DAN: Yeah, I like that one and track two. It's named after their first album, Ringodom or Proctor. I haven't heard it though.

CHRISTOPHER: Nor I, though the all music guide tells me that it brings together "such diverse influences as The Zombies, Talking Heads, The Flaming Lips and Brian Eno." Whom, coincidentally, are exactly the same bands I wrote down in my notes for that song.

CHRISTOPHER: Well, okay, maybe not the Talking Heads. But that chord progression may as well be a sample from Odyssey and Oracle, and the synth is all Eno.

DAN: Yeah. He lights a cigarette. Man, I'd hate to hear what you'd say if you didn't like the record.

CHRISTOPHER: Yeah, I know. But look: the thing with the Athens collectives, like Olivia Tremor Control or Neutral Milk Hotel, or even Of Montreal, is that they're as much deconstructive of the sixties psych-pop idiom as they are apoligists for it. They place the same emphasis on experimentation and mood as they do sugary pop hooks. That's why Hysterical Stars sounds like Bewilderbeast to me: there's much higher fidelity, and I don't mean because the production is technically better than E6's eight track records. I mean that it's faithful to a fault, relying too heavily on those classic records and not the musicians' accumen. There a lot of great theses that connect with the other, but not a lot of synthesis, d'you know what I mean?

DAN: Yeah, you're right. But I don't know. I mean, come on: it's fun, it's catchy, it's energetic. And damn if songs like "Skirts Are Taking Over" and "Born in the Seventies" aren't going on some mix-tapes. Come on, "Watching old movies as a young man/can give you some good ideas: you can start a band?" Tell me that's not everyone we know our age.

CHRISTOPHER: It is, and I really like those songs. I don't know, sometimes I think the point of criticism is to spoil music by reifying the ineffable things intrinsic to its nature.

DAN: Say that again, in English?

CHRISTOPHER: I think I may be overthinking it.

CHRISTOPHER: But I still think Nick Hornby would like it.

ENTER HORNBY STAGE RIGHT. He is wearing a long pea coat and carrying a .38 Luger. Nobody detects his presence.

DAN: Why is that?

HORNBY aims the pistol at an unsuspecting CHRISTOPHER.

CHRISTOPHER: Well, I think it appeals to the shallow game of spot-the-influence that he'd be into, and of course he'd write how it reminded him of how that record was playing when he felt his girlfriend's breasts --

HORNBY fires the pistol; CHRISTOPHER falls on his back, still in the chair. He dies.

DAN: He wheels around with much agitation and surprise. What the

--HORNBY fires the pistol at DAN. DAN falls to his knees, clutching his chest. Oh. My. God. He loved About a Boy. You, you, has-been! He falls on his face in front of HORNBY, and dies.

HORNBY drinks the rest of DAN'S latte and steals his pack of cigarettes. He continues to walk and EXITS STAGE LEFT. The curtain falls.