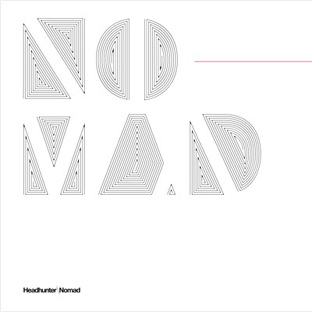 Nomad opens mysteriously, with a mild vacuum and electronics like gales of wind. The steady kick drum quietly enters and gains velocity. An implacable piece of electro-percussion pans back and forth, scampering like a horned lizard. Over two minutes pass before a seductive synth line and a grooving high hat alight on the creeping bass. Who is this nomad, and through what hazy region does he travel? It seems that this is an outsider of the future, either on the run from a cyborg-killer or looking for the nearest nightclub.

In fact, the nomad is the boyish Headhunter, the Bristol, England, producer of the ever-evolving dubstep genre that emerged from the UK Garage scene alongside grime several years ago and quickly took on a global following. Nomad, Headhunter’s first full-length release and first offering in CD format, is steeped in dubstep’s traditions—the sprightly half-step beat, the ominous two- and three-note synth lines, the heaving, subsonic bass that blasts out of the sub-woofer directly into your solar plexus—and sure enough, Headhunter employs the trademark “wobbler” bass in the aptly-titled “Baseflow.” Dubstep tunes from the likes of Skream and Benga are spacey and dark by nature, but hits like “Midnight Request Line” are tinged with hyphy-esque funk. Headhunter’s Nomad, taking cues from the mutated sonic vocabulary of minimal techno connoisseurs like Berlin’s Basic Channel, is altogether headier and more unreal. This is a futuristic, moody and vaguely menacing kind of dance music.

Saturated in colorful trails, bursts and spurts, driven by an ostensible half-beat shuffle—think “dun dun POP dun,” not “dun POP dun POP”—and overlaid with fast, intricate and infectious patterns of claps, shakers, congas and snares, these ten tracks meld together in such a way as to imitate the evolutionary phases of some half-organic, half-robotic being. “Prototype,” with its creepy echoes, propulsive bass and whipping snare, brings to mind Johnny Mnemonic’s would-be assassin, whose thumb doubles as a razer-sharp lash. It’s capable of triggering a quasi-spiritual trance on the dance floor, and just as well the soundtrack to the nail-biting final showdown between Molly Millions and the assassin up in the windy, decayed geodesic domes of Nighttown. The pursuit gives way to the plodding kick drum, lazy snare, and squawking, wandering bass of “Technopolis,” which segues into the leering “Grounded,” in which rapid-fire congas, propulsive taps and popping sounds deliciously snap together in intricate concert. Liquidy layers and juicy layers, all sandwiched, pushing deeper and forward, finally give way to the breathtaking “In Motion,” an anthem for cyborg sex if there ever was one, with cool, shimmering high hats, a punching synth hit that seems lifted from Nintendo and a bass that groans and beckons: Prithee, dearest cyborg, satisfy my loins for all time.

“Physics,” “motion,” “flow”...if Headhunter was Robo-God’s messenger, his statement to the growing international dubstep clan would be clear, familiar and irresistible: move that body.