1. Intro
2. We Were So Entangled
3. No Ordinary Caveman
4. Listen Young Stunners
5. Big FM Radio Hit
6. Everyday Should Be a Costume Party
7. Daydream Vacation
8. Letting It Go on the Ohio Turnpike
9. Six Bags of Confetti
10. Keano’s Couch
11. Before We Go to Bed
12. There is Loud Laughter Everywhere
13. Roll Credits 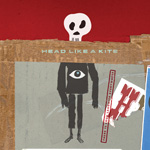 There is Loud Laughter Everywhere

Songwriter Dave Einmo has such an antiquated treatment of samples that his use of them peppers the songs on this, his sophomore effort, with moments simultaneously rote and enjoyable. Of the same playfulness of Menomena’s debut, if not their Ikea ballroom spasticity and innovative tool-building, Head Like a Kite is layerless, straightforward pop music, and one of the few examples that immediately comes to mind of a listen that benefits for its funneled capacity.

The samples here can be separated into three types. There are those that exist for themselves, are presented like revelations rather than novelties, and they can’t help but lend the album’s aesthetic a superficial quality unfair to what is otherwise an economical electro-pop record. The second order are of those ingrained overtop these songs like drizzled syrup. A mixed bag, these samples are sometimes instituted regardless of context; when a siren intones on the infectious “We Were So Entangled,” it’s far less essential than the growing buzz of synths or the stark cleanliness of guitar chords, and its inclusion speaks to an anachronism of approach, treating samples like some still-new technology. Head Like a Kite never aims at the pseudo-intellectualism of Byrne and Eno’s My Life in the Bush of Ghosts (1981) or the whiz-band novelty of Clash guitarist Mick Jones’ This Is Big Audio Dynamite (1983), and couldn’t be either if it tried by virtue of coming nearly thirty years later. And finally, the third strata of samples are, like the best examples of their use as a songwriting tool, indistinguishable from the rest of the mix for their appropriateness, such as the horns, guitar jabs, and soul strings on “Everyday Should Be a Costume Party,” or the title-track’s insouciant plunk near album’s end.

The whole project seems to nod and wink, much more intelligently self-aware than the sheen implies. There’s a genre visitation taking place, unapologetic and purely forgivable for the strength of a lot of these songs. “No Ordinary Caveman,” “Listen Young Stunners,” and “Before We Go to Bed” are knowing slow jams, and “Daydream Vacation” is exactly as catchy as it needs to be to overlook its strictly-tailored thesis. (Ironic, given that the female lead asks us to “take a chance,” though risks in music so universally accessible are few.) Most of these tracks are immaculately produced to a size bands have a hard time duplicating on stage, which sometimes—as is the case with “Vacation,” “Big FM Radio Hit,” and “Six Bags of Confetti”—give them the legs they need. Elsewhere, such as on the industrial-lite cheddar of “Letting It Go On the Ohio Turnpike” and the robo-voice of “Keano’s Couch,” the experience is too mainstream even for its intended light-heartedness. Who could debate that with lyrics like “I stole your sister’s medication / and laughed all night long” that gestures giant and obvious are at play?

The question of intent is a tricky one; CMG moustache-guru extraordinaire Dave Ritter and I an inexhaustible in our debate of whether it’s possible to make any sort of conclusion about an artist’s intent with only the art as evidence on hand. (We can’t; Ritter, your move.) It helps, though, when an album is so self-consciously carefree, to make an assumption, flawed though it is. In places, There is Loud Laughter Everywhere sounds very much like a labor of love. The attention to production details, the easily reached choruses of the album’s immediate melodies (despite the former anal retentiveness), unveil something that occasionally surprises with its substance. For “Daydream Vacation” and “We Were So Entangled” alone, the band’s sole task—to entertain—is borderless and unobfuscated.

What remains to be seen is if Einmo can stretch what might be an already-exhausted bank of songwriting approaches. But for now, There is Loud Laughter Everywhere cheerfully inhabits that happy space before restlessness sets in and entangling hypotheses intrude, rearing their ugly demands.