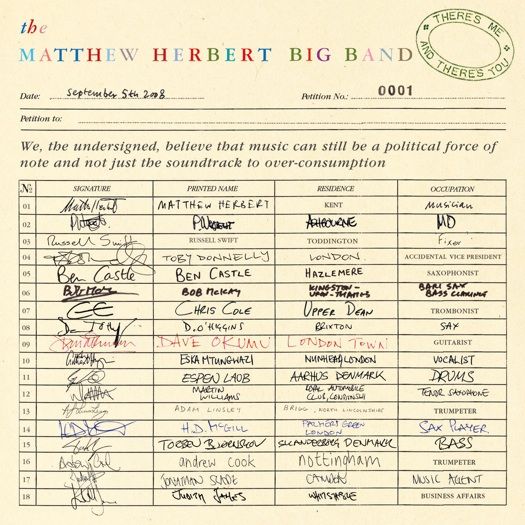 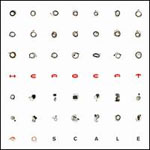 I’ll readily admit that my first experience with Herbert was last year’s excellent Scale. I recognized it as a complex pop album, but mostly just recognized it as a pop album, and there was a good amount of the record, both philosophical and technical, that I disregarded in my analysis of the music. For example, it has very little bearing on my enjoyment of Scale that Matthew Herbert was sampling everything and the kitchen sink to construct his songs. Quite honestly, I care even less what his views of musical and cultural re-appropriation (not to mention keyboard pre-sets) may be. I don’t mean to come off as an anti-intellectual (although Herbert himself tends to act like “intellect” means the same thing as “condescension”) but to me “Something isn’t Right,” “Birds of a Feather,” and “Movie Star” are simply slinky, sexy, thoroughly excellent pop songs. Isn’t that enough to celebrate in and of itself?

Of course, fans of Herbert will not be surprised when I note how unprepared I was upon receiving two more recent Herbert releases courtesy of !K7 records: a reissue of his debut album, 100 Lbs (1996), and Score, a compilation of his soundtrack work for movies and ballet. For anyone like me who adored Scale for its pop merits these two records are bound to be a little disconcerting at first. Given time, though, and judged on their own merits, each proves itself, for quite distinct reasons, to be extremely rewarding — even for those of us poorly-versed in house, techno, or neo-classical film scoring.

When it was released in 1996, 100 Lbs collected Herbert’s early 12” EPs; both then and not its purpose is to capture the best that the young dance producer had to offer over a decade ago. The original release amounted to some 72 minutes of quite interesting house music; the reissue adds an hour of extra material. Overall, it’s a bit daunting to take this album on. Some of the material here hasn’t aged particularly well, falling into the stereotypes of euro-trash techno: heavy drums, thick, pounding bass lines, and goofy electronic flourishes. “Thinking of You,” “Desire,” and the title track all sound like Andy Samberg designed them. For the most part, though — even where the sound is somewhat dated — the songs remain entirely danceable. The fluid “Oo Licky,” the funky-as-hell “Friday They Dance,” and the mammoth “See You on Monday” (Architecture in Helsinki totally ripped this one off) all lock into durable grooves that transcend the decade that has passed since their initial release.

Score is a different beast altogether, something that becomes quite obvious from the opening notes and thick strings of “Funeral.” Since ’96, Herbert has expanded his horizons significantly, moving into the film-scoring realm of John Williams, Ennio Morricone, and Phillip Glass. This new collection highlights a body of work that, while rarely revolutionary, nonetheless veers pretty far away from the dance music Herbert is best-known for. There are hints of his day job, most notably on album centerpiece “Rendezvous,” a ten-minute track that intersperses classical and vocal elements with glitchy house reinterpretations, but for the most part he plays it pretty safe. The results are quite beautiful for the most part: the woodwinds and strings on “End” make a lovely counterpoint to the quiet, rhythmic bass; the big-band swing of “Rivoli Shuffle” lets Herbert’s gift as a jazz composer shine; and the goofy, manic “Running From the Credits” makes clear that the man does have a sense of humor. The collection’s finest track, “Singing in The Rain,” incorporates some of Herbert’s electronic toys into a song that’s all Hollywood glitz and big-band fun. Certainly, it’s hard to judge Herbert’s skill as a composer for film without some of the accompanying visuals—anyone who sat through Notes on a Scandal wondering why Phillip Glass was trying to ruin a perfectly good movie can attest to the importance of matching mood and music—but the music itself is quite persuasive.

Matthew Herbert has quite a task ahead of him in the coming year or two as he attempts to follow up Scale. No doubt there will be more credos, grand pronouncements, and other gestures bound to elicit collective eye-rolling from us here at CMG. But when you just press “play” and sit back and listen to his music, Herbert is not only proficient but indeed quite compelling in any number of genres and styles. He’s consistently good, and both 100 Lbs and Score document that consistency, as well as provide evidence of his growth and continuing evolution as a musician. If anything they should convince us that not only is Herbert capable of topping Scale, he probably will, and not in any way, shape, or form that we’re expecting.