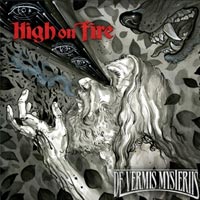 While listening to High on Fire’s newest release, De Vermis Mysteriis, and simultaneously watching a random Youtube interview with bandleader Matt Pike (this one from Australia’s Soundwave Music Festival in 2011, actually), I had what I could only call an obvious epiphany. That phrase rings pretty oxymoronic in retrospect, but the idea is that I had an overwhelming realization of a parallel that I should realized long ago. This I think could be put on par with finally realizing, at some forgotten tender age, why the tooth fairy’s already-conspicuous and well-circulated American currency smelled just like my dad’s laundry detergent. Forehead slaps follow in both scenarios, but still: after listening to Pike wax grizzled-poetic for a few poolside moments to a tall blonde reporter in faux-tropical Australia about his deep, sincere love for Motörhead’s Lemmy Kilmister, it was unavoidable for me to see it. Matt Pike is our Lemmy.

Which became more inarguable by the moment. There Pike sat, cool as Coltrane, then and perpetually shirtless—as it’s been independently accepted in all major world religions that for Matt Pike to wear a shirt in public is an assured apocalyptic harbinger (and we’re not talking about the magazine standard of attractive fellows, now). Pike settles in a deck chair, a magnificent, crusty hobbit of a man, gravel crowding every word out of his throat, chain-smoking in the blaring sun and eating up every second of the interview with an endearingly open, honest humanity. And like Pike relates, Lemmy may look like he’s melting into Guinness foam faster than a cockney Toxic Avenger, but he’s got the confidence to carry it that turns it into something compelling and, by turns, legendary. Can we remember, for a moment, the appeal of Cindy Crawford’s mole? Well, Lemmy’s moles eat four of those for breakfast every day, and the number of moles that Lemmy has is still one of the great, unanswered questions of modern science. Your move, Cindy Crawford.

But the more that I watched, and the more I thought back to myriad High on Fire records and beyond, the more I realized that there were a lot of other striking parallels. Pike made his name, like Lemmy, in a highly conceptual, genre-defining outfit that’s exalted by a devoted clergy of followers (as guitarist for sublime stoners Sleep, in contrast to Lemmy’s first big gig as bassist for UK space giants Hawkwind). Both continued making music immediately following the breakups of those groups, showed evidence of having taken decided steps to streamline and simplify their sounds, and found success within their already-established circles. I guess that’s where things start to get a little blurrier: Motörhead took off in the mainstream, and, comparably, Pike seems aware of but unaffected by that lack in his own group. Still, the important elements remain, and no matter how many records they put out or how similar they may sound, both bandleaders’ widely accepted mastery of their craft transforms that seemingly formulaic character into a credible reliability and dedication that ultimately attracts diehard fans and lends timeless acceptance. These legacies are the real rock and roll hall of fame, and these are the guys that can get away with anything but manage to keep earning trust by never stepping off of what they know how to do best.

I guess that whole analysis kind of ruins the surprise as far as my feelings about this new High on Fire record go. I’m glad we can get that out of the way; to be honest, that’s the badly-kept secret here: there isn’t really much surprise as far as my feelings go, or really as far as anything goes concerning De Vermis Mysteriis. It is, first and foremost, another extremely solid effort from the exasperatingly reliable trio. I personally enjoyed some of the more atmospheric outings from previous effort Snakes for the Divine (2010), which seemed to be the only point of possible contention for the few detractors in its wake, and in that I was officially convinced that finding something to dislike about a High on Fire record was much more difficult than accepting its predictable strengths.

On that note, De Vermis Mysteriis leaves no question. Opener “Serums of Liao” tears in with Des Kensel’s gut-rumbling pounding, sounding nothing less than a war march, as Pike and bassist Jeff Matz quickly match pace with guitars that, in the best of Pike’s legacy, aren’t so much guitars as they are jet engine turbines with guitars being thrown into them. That makes at least one aspect of the record highly worthy of unique praise: the immediate success of Kurt Ballou’s why-weren’t-we-doing-this-sooner production work.

Some might call it gloss, but Ballou’s meteoric rise as a lauded producer offers plenty of evidence for his careful handling. Now, it’s admittedly a minor step up in the fidelity department that finds a lot of familiar mud brushed off in the process, and which is reasonably likely to satisfy those with a taste for more modern production and keen on getting a clearer shot of the brutal action that the stoner pastiche, on which Pike wrote the modern text, loves to keep smothered under veils of smoke and noise. But in spite of Ballou’s amazing attention to detail, he and the band both still manage to reveal in pleasing strokes that the rawness for which the band is known can’t be exorcised no matter how nice the microphones get. Conversely, for a band with as much credibility and seemingly universal appeal in the metal world, it seems only reasonable to allow them the opportunity to put things on the kind of naked display that such crisp production offers—if they’re in the mood—and lord knows Kurt Ballou is the person to make it happen without sacrificing the visceral feel toward which the stoned aesthete tends to drowsily lean. His success here makes De Vermis Mysteriis the closest thing to a standout that the High on Fire catalog can claim, and the band makes good on what Ballou brings to the table.

Whether tearing ass down the Alps on a war elephant in the tumbling midst of tense burners like “Serums of Liao” and “Fertile Green,” or sublimating into the column of hash smoke rising up into a desert sunrise during Sleep-inducing stoner anthems like “Samsara” and “King of Days” (can you tell that I love that Pike consistently upholds so much of Sleep’s mystical foreign imagery?), I find myself viscerally engaged enough with De Vermis Mysteriis so as to not have to (or not have the wherewithal to) make the kind of big deal out of my Lemmy epiphany that I did in my attempted exposé of the tooth fairy. These things come to be accepted as common knowledge soon enough.