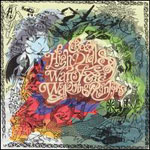 War of the Wakening Phantoms

“This High Dials album is okay. That new Doves album is much, much better.”

The preceding sentence was, in synopsized form, the entire review that I wanted to write for the High Dials’ War of the Wakening Phantoms. Despite critical accolades and a cavalcade of epic melodies, this is an album that manages to leave no impression at all on the listener. After giving this thing weeks of my valuable ear time (i.e. I could have actually been listening to the underappreciated Some Cities), I still had absolutely no opinion of it, positive or negative. So that sentence above—a shameless, heartless cop out of a review premise if ever there was one—was pretty much all I had. And, while I lack the shame or heart to stop myself from starting this new review with that original sentiment, I knew I had to abandon it. Because this album—however maddeningly middling—deserves better.

Allmusic.com tells me that the High Dials are from Montreal. This is one of the reasons that opening sentence didn’t work when I tried to stretch it into a review: it was predicated upon the idea that some unheard, mediocre Britpop album needn’t be sought out when an infinitely better one had already been released this calendar year. But Canadian or not, War of the Wakening Phantoms is a Britpop album through and through, from the preciously clipped vocals that coo about “shifting skies” and “a little boy’s drum that beats in his heart” to the indomitable wall of guitars, guitars, fucking guitars that dominates this album from start to finish. These aren’t The Woods geetarz, these are delicately picked acoustic ones, or searing electric ones, all played with the type of heartfelt vehemence that fills stadiums. War of the Wakening Phantoms sounds like the bastard child of Coldplay and Oasis, an unattractive, unremarkable offspring suckling at the expended teat of The Bends and getting thrown afterward into a crib with seven dozen other unwanted children named the Muse or Travis or, I dunno, fucking Starsailor or whatever.

Of course, they’re not British; they’re Canadian. Right. Still, these comparisons are apt: at the end of the day, these are the bands that the High Dials sound like. While it’s detrimentally noteworthy that this band conjures the word “Starsailor,” it’s also to the band’s credit that it had me comparing them (if unfavorably) to Doves in the first place. War got me thinking about all the melancholy, starry-eyed guitar rock of the past decade and further, both good and bad. It made me think about Starsailor and Radiohead and everything in between, of the Idlewild that I love and the Idlewild that I hate, of R.E.M. and of the Smiths, of the Byrds and the Who and Big Star; but over and above all of these, the High Dials remind me of 50 Cent. Why? Because both earned the exact same rating from me, a shifty 53, a faint headnod above the half empty mark.

This is noteworthy (trust me) because I hate 50 Cent. When I saw him doing press for his autobiography recently, he misused the word “personable” (it’s “personal,” idiot) and I almost shot my television nine times in the face. With the exception of the Black Eyed Peas, no musical artist draws my ire with greater regularity or bile than 50 Cent. So how did the High Dials’ innocuous-but-pleasant album earn the same rating as a shitfest like The Massacre? This is the question that plagued me for weeks (along with “Why aren’t I listening to the Doves” and “How am I going to sell this comparison, anyway”), for I knew ineffably that both ratings were justified.

What I concluded was that The Massacre was an album that mildly exceeded my expectations; as loathe to admit it as I was, the whole shameful affair had a certain base appeal. War of the Wakening Phantoms, on the other hand, presents one of those unfortunate situations where I have to rate an album based on where it falls short. I rated Mr. Jackson a good 20 points higher than I expected to; likewise, the High Dials’ score, given the band’s aspirations and nearest musical relatives, falls at least 20 points short of what it could have been. This is because, from the monstrously over-produced guitar strums of opener “The Holy Land” to quaint closer “Dust in the Sun,” War is quite possibly the most boring album I’ve ever heard, an album completely unremarkable in every possible aspect.

I’ll interject to admit that this has been a very poor review: I’ve spent the majority of it talking about Starsailor, 50 Cent, and myself, scarcely mentioning the band at hand except to note that I used to think they were British. This is not musical analysis in its finest state. But that’s because the music of the High Dials bears no comment —- it barely even exists. On their own, any of these songs would be engaging enough; taken together, they grow tiresome by track three, sludgelike by track seven, and positively soporific by the eight-minute “Your Eyes Are A Door.” After almost a month of listening and 860 words of writing, my conclusions are the same: The High Dials have got nothing to say to me, and I’ve got nothing to say about the High Dials.