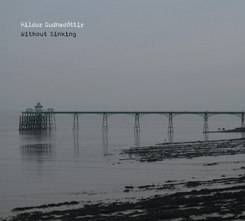 Albums like Without Sinking may or may not owe an obvious debt to Gavin Bryars. It’s the same kind of embrace of slow, lulled passages that marks her music, and Guðnadóttir may even be tempting direct comparisons by talking about sinking in her title, though to be fair this is a much darker album than The Sinking of the Titanic. Maybe that’s the joke: this boat doesn’t sink and we’re left even less happy? Either way, Guðnadóttir is totally playing with the kind of underwater film scoring techniques that are fairly typical and transforming them into a giant, endless pulse of liquid. This album is about layers, and everything is groaning on Without Sinking; maybe these are bodies who have drowned and now float, and there isn’t any levity at all. Or there is, depending on how morbid you want to be.

She’s a cellist, so most of what is here is cello-based, although zithers, clarinets, and pianos sometimes make cameos, joining the atmospheric throb of resonant harmonics as accents to the murky layers she creates on her preferred instrument. Cellos are creaky instruments in the most wonderful way; they sound about a billion years old with only little effort, and especially so without the cleaner and more zippy tones of double bass, viola, and violins flirting around them. But the recording here enhances that sound and tone; blast this on a good pair of speakers and you may just hear the bow clip on every wound of her strings. Just like you feel every wave on a boat if you’re attuned to such things, and that seems to be the process here: the close-miked claustrophobia of the recording has the effect of building the sound outwards till it seems to reflect every aspect of the loose nautical story the song titles convey: there’s the wind, the clouds, droplets of rain, the roach snapping in the wind, the silent shuffle of telltales, the clinking of bottles, and the weightless feel of heeling or hiking to correct that heel. If you’ve ever experience it, check the way “Aether” seems to brilliantly capture that mixture of light and mist in the air after rain out on the water, the rain being most of the album to that point. “Overcast” does a good job of sounding like what it suggests itself to be, I mean, though it also makes the approach of rain clouds seem more like a longing embrace than it does trouble for folks on the water.

One doesn’t require an appreciation of nautical imagery to like this album, however; much of Without Sinking could just as easily be digested solely in terms of mood. Most of this album consists of slow, languid melodies—the big exceptions being “Opaque” and “Into Warmer Air,” which I’ll get to in a sec—and those work really well, though perhaps these tracks aren’t quite as evocative as work that mines similar tonal terrain like that of Phillip Jeck or, again, Bryars. Still, Guðnadóttir has a very good sense for the atmospherics of her songs, letting different layers meld into one another and allowing deep bassy notes to reverberate against one another. “Unveiled” sounds like an echo of itself, which—sorry—won’t make sense until you’ve heard it, and “Erupting Light” is all about the shifting dynamics of chorded notes, and performed brilliantly.

The other two tracks I’ve mentioned above are more typically song-structured, but they also work wonderfully. I like “Into Warmer Air” more than “Opaque,” I think, since the latter runs through several different sections and maintains the atmospheric stuff evident on her less straightforward material, but Guðnadóttir really shines as an arranger on “Opaque,” filling in a prog set of drums, bass, and guitar with cellos, cellos, and more cellos. And it’s pretty and disturbing at the same time, just like dark, dark water, which I assume is what the name references. And these little bits of motion are important too—while the album as a whole is quite as awe-inspiring as individual moments on it might suggest it to be, Guðnadóttir’s approach to these ideas is gripping throughout. It’s dense stuff, but it’s worth swimming through.