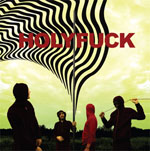 "Electronic music collective" is one of those terms that may strike fear in a particular kind of music lover's heart. It's like "jam session," or "Finnish," or "root canal": things that require a shit-load of drugs to enjoy and otherwise a high tolerance for pain and/or tedium. When I saw Holy Fuck's second album, the simply-titled LP, described as the work of an electronic music collective, I couldn't help but knee-jerk a bit of trepidation. Fortunately, having seen these guys provide a pretty entertaining opening set for Wolf Parade a couple years back, I felt duty-bound to at least give it a shot.

LP is one of the least likely and most thoroughly entertaining pop albums I've heard in months; a work of great focus coming from what amounts to one giant, nebulous rhythm section. Think !!!'s sense of beat paired with the polymath musical hodgepodge of Menomena; think LCD Soundsystem without the ego. And it's tight: there's only one song here over five minutes, and that's "The Pulse," a song so stupidly addictive it could easily go on for twice that and still be killer. Compared to their self-titled debut album (2005), where only two of the eight tracks were under the five minute mark, this is a definite improvement. Especially you don't normally expect a band that plays improvisatory sets and integrates all sorts of unorthodox instruments to be this focused while writing solid pop songs.

Consistently throughout LP they do just that. Take "Milk Shake," a song full of squiggly '80s synth lines and with a vaguely Go Team! quality about it. By pulling the drums high in the mix and focusing in on a repeated vibraphone trope the band manages to make a killer jam. Take the tremendous run from "Frenchy's" through "Echo Sam" where they definitely in the zone, their irresistible emphasis on drums and keyboards only outweighed by their brilliant sense of drama. The fantastic "Lovely Allen" has an anthemic build worthy of their friends in Wolf Parade, much of it due to guest violinist Owen Pallett of Final Fantasy. Two songs later and we find them harkening back to the gravy days of '90s RnB with the tremendous "Royal Gregory," only to follow that with the gritty, propulsive rock of "Echo Sam."

LP has its problems too, mostly toward the beginning and end of the record. Given time, though, there's not a song on the disc that doesn't have at least an element or two that'll leave you smiling. These guys need to refine their sound a bit more, get it well-polished and geared right, and they could be a genuinely significant band. For now at least they run the risk of giving electronic music collectives a good name.