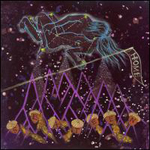 I usually don't review WTF albums, pretty much as a rule. When Thunderegg came up in message board chat, I thought, "Leave it to the alcoholic writers," though I was curious about what brilliant plans they would conjure (and oh, if only you knew).

But then here comes Home with an album called, no lie, Sexteen, which is about as opaque a WTF title as oh, Sex and Teens, and for whatever reason it occurred to me that yeah, I don't generally review WTF albums, but WTF, why not?

Now, there are very few albums in the history of music whose concepts and execution root them in a canonical consciousness. Sexteen is not one of those albums. Or is it?

Sexteen is a concept album about - get ready for the shock - sex. Whoops, sorry, the website says "fucking." Sorry. It's not a concept album about some high-minded philosophical pretension, or some unique opposition (Drum and Mt. Heart Attack, for instance), or some incredible visionary idea. It's an album about fucking. You know, that thing that approximately 22% of all songs ever written are about. I think (someone check my "facts"?) Isaac Hayes is responsible for at least five such albums, though his press kits wouldn't outright say it. Does he even need press kits to explain what his albums are about?

"Take me in / Swallow me whole / Do you wanna feel my fingers go inside of your hole?" (My personal favorite end-rhyme of the album.)

"I can go fast / You can flabbergast / Gonna grab on and ride that juicy ass." (Probably one of the oddest uses, contextually and rhyme-scheme-wise, of the word "flabbergast" in the history of language.)

"There are but a few precious hours / This evening / So straddle me in the back captain's chair / And let me bury my face in your hair / Let me stay there." (Cue heartbreak.)

So there you are. I could go on. I've got nineteen songs to cull from. But I think three examples are enough to illustrate the concept of Sexteen: it's got dirty high school sex lyrics, which at their most poetic would be worthy of a book with Fabio on the cover. It's a veritable Idiot's Guide to Retarded Dirty Talk. Need to encourage your lover? Just take the cue from opener "Other Times (solar)": "You do your job very well." That'll really get her engines revving. But here's the thing: the songwriting is actually more than passable. Some of it is downright...good. Most have plenty-decent verse, those of "Juicy Ass," appropriately enough, bouncy and jubilant. They span an impressive dynamic range, from the tender "Straddle Me" to the moody "Deep Inside" to the slambunctious "Push," which (genius sequencing, anyone?) precedes "Deep Inside." It both hurts and amuses to say that some of them posess some damn fine melodies.

To be honest, I don't think I've ever encountered such an awkwardly good album. Most bands, they'll pair ridiculous lyrics with equally over-the-top music (like, say, McLusky's "Lightsabre Cocksucking Blues" and its line, "I'm aching from fucking too much"). But to have genuine, sincere, quality musicianship wedded (wrong word, I think) to a spoken word interlude about handjobs, and one where the girl arouses the guy by talking about the pleasure of looking down and seeing manicured nails around his shaft? I am, to use one of Home's tropes, um, flabbergasted. Can I recommend this, really? When one of the album's tracks is called "Fucking" and its chorus is "Fucking is currently my favorite form of expression"?

Y'know, I don't know. I've got nothing. I feel like if Home drummer Sean Martin cut off a ten-year hiatus to write these songs, I ought to have something more to tell. But I'm overwhelmed by the sheer variety of jokes I could make at the album's expense, while simultaneously dead-serious in my recommendation of the album's songwriting quality (if the lyrics were of any depth or poetic value, I might say with some assurance it deserves a 75%). Have I wasted three hours of my life during the course of listening to it and reviewing it, or have I had a singular sonic experience? I can't even say that I'm stuck between a rock and a hard place because of context. So I guess...check it out. It'll be unlike any other album you own. You may get a dirty kick out of it. You can play it for your friends and scratch your heads together. Just for heaven's sake, don't use it for your lovemaking soundtrack. Unless it's drunken sex, and you don't mind laughing during the dirty deed. Then by all means, go nuts. I mean, crazy.