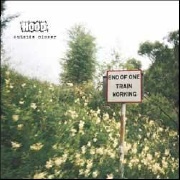 Metronomic drums struggle through scattered static bursts. A chord is filtered through a guitar; an outline emerges; at last, a drum roll. Someone is singing — it sounds like English, but no one’s paying attention — and he’s hiding behind a wall now, cooing something melancholic. (He doesn’t want to be heard.) The guitars flesh out, and in this light, they’re gorgeous. All of the pieces stay put long enough for us to get used to them, and finally we hear the man say, “Oh, it has to change.” So it does: sudden horns rise and fall like bleary passing headlights in the rain. Strings fall into place — they’d been there all along, it now seems obvious, we just couldn’t see them. All the lights are on, and for a moment, we stare the monstrosity dead in the eye before it all collapses. Something chimes in the shuddering darkness, and it’s over.

It’s called “Any Hopeful Thoughts Arrive”, and it’s one of the early highlights on Hood’s Outside Closer. Granted, the above description could describe most of this album, but even if these tracks are all the same burnt color they’re anything but monotonous. Rather, these tracks build on one another, perfecting a mood, a groove, an ardent whisper. By the time “This Is It, Forever” rolls around, you’ll pray that the title’s a lie. So encompassing is the singular mood presented here that — at least while the album’s on — it’s hard to imagine listening to anything else. This album may qualify as an opiate.

This all-encompassing quality also makes the subtle differences between the songs more apparent. The immediate, swirling strings and pop-clap percussion of “The Negatives . . .” starts the album on a unique note, but it’s all a lovely façade; only the choruses reveal the melting beauty the rest of the album holds. “The Lost You” is a stuttering, gasping hiss-hop stunner that’s not to be trusted — just wait until the car-crash chorus hits the first time, and you’ll know what I mean. The song dissolves in a haze of feedback and echoed vocals before the shockingly human guitar strums and stately strings of “Still Rain Fell” usher in yet another interpretation.

Outside Closer seems to have mined an infinitesimal point on the musical map, something near the intersection of RJD2, Sigur Rós and Iron & Wine. It’s the detail and obsession with which Hood has excavated this minute point that makes the album so warmly, hopelessly riveting. They understand something intuitively and in its entirety; what Outside Closer presents is nine ways of looking at that oblique something, whatever it is. It’s abstruse, and it’s almost all the same, but that’s okay. This album is like watching through a keyhole as the sun explodes: an insufficient glimpse of something unfathomable. All we can do is press our eyes to the door and hope not to blink.