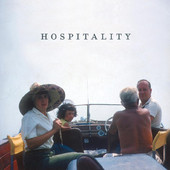 There’s something predictable about Hospitality. Perhaps it’s in the fact that they’re a New York-based three piece that plays concise songs at least partially about New York, or in their self-titled debut album’s understated, clean cover art, or maybe it’s just the inevitability of jumping to conclusions when one looks at the tracklist and sees a song called “Liberal Arts,” which is—surprise!—at least in part about the long term consequences of opting for a four-year degree that leaves one with no career path in sight. Off of this, it’s easy to make a catty comment about Vampire Weekend and ignore the band altogether, labeling them a casualty of an early-year release date and their own politeness.

This, of course, would be a pretty lousy thing to do, given that Hospitality’s tightly constructed, jazzy indie pop rarely sounds like the bands they could share identifying keywords with, is often very good, and is nowhere near as cloying as it could be in the wrong hands. Singer and bandleader Amber Papini’s songs rarely overstate themselves or overstay their welcomes, instead working through relatively understated pop arrangements in order to tell their dirty jokes, animate her characters, and turn sharply-placed 7th, 9th, and 11th chords into striking statements more effective than they might initially seem. Like many craftsmen of smart, succinct songs unfairly branded as functional background music by listeners and Muzak specialists alike, Papini and her band sets themselves apart through tiny details. Her voice—not unlike that which belongs to Tracyanne Campbell of Camera Obscura, who these songs almost certainly owe at least a small debt to—is considerably agile, sounding thin on one line and richer on the next, jumping from lows to highs and demonstrating a fair amount of range in the process without ever flaunting virtuosity.

Opener “Eighth Avenue” gives them ample space to immediately demonstrate this, as she dissects the disconnect between herself and an addressee; “I’m lost in a land, I’m not twenty-seven,” she sings, and it’s from a place of having survived that decade that informs much of what she does across these songs. The somewhat threadbare “Betty Wang” is a fairly simple tribute to a coworker, while the low-key romanticism of “Sleepover,” which features some of the album’s most striking melodies, is defused by a chorus that ends in Papini’s acknowledgement that she’s being taken for granted and doesn’t care. And the aforementioned “Liberal Arts” is a character study in which its character gets an English degree, veers off in other directions, and finds nothing to be nostalgic for: “Long sober walks upstate / You don’t miss a thing, do you?” she asks, and for at least a subset of the population (and quite possibly a substantial number of people who will come across this record), there’s a moment of very real resonance in it.

For all its supposed politeness, this is distinct, sharp music. That these songs can contain seconds-long synthesizer freakouts, be built on accordion drones, flirt with strings, incorporate Afropop-derived bass lines, and so tightly integrate start-stop rhythms is a testament to Hospitality’s skill as editors, rarely yielding something annoying in a genre where annoyance comes as much from trying too hard as from being infuriatingly unambitious. It’s better for those involved that they don’t attempt to fire on all cylinders at once all the time; it’s better for us that we have at least one record this year that understands exactly what it can do well, then does it, and makes it seem utterly effortless.