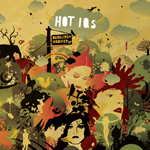 With the release of the Dangling Modifier EP, Hot IQs enter a crowded room. This room, it's filled to the brim with garage-rock bands flexing pop sensibilities. Yes, the Strokes, Franz Ferdinand, and several other bands have covered much of the same ground, but these references clearly suggest what you'll hear on this EP: tight instrumental dynamics, punk energy filtered through pop songs, and a handful of ultra-catchy hooks.

Despite the familiarity of "genre" this Denver-based trio still delivers. The drums, courtesy of Elaine Acosta, are precise, simple, and hard-hitting throughout. Singer Eli Mishkin chugs out the guitar chords while bassist/backing vocalist Bryan Feuchtinger drops low-end melodies beneath the distortion. The band is ferociously tight and their sound is complemented by another key asset, that of Mishkin's voice. He works his mid-register croon all over these songs, occasionally resorting to a well-placed shout or tasteful falsetto.

The five tracks, one of them an Archers of Loaf cover, range between the two and three-and-a-half minute mark. The band achieves a lush efficiency with these brief song structures, filling them up with multi-part verses, choruses, bridges, and outros. Case in point: within the first minute of "Retromuff" Hot IQs have moved through three different sections -- the first a minimalist drum stomp with subdued guitars, the second riding on the strength of Mishkin's vocal melody, and the third, a chorus, exploding with vocals, loud guitars, and cymbal crashing percussion. Less than a minute later, the band is descending into yet another part, a cascading, guitar-driven coda. This type of catchy and fast-paced structuring is a signature aesthetic of the EP. The idea, it seems, is to keep us wanting more.

The most arresting tunes are the first three. There's "Duck & Cover" with its frantic bass melodies and buried Grandaddy-ish synth parts, "Elephant in White" with its surprising acoustic guitar and harmony-laden outro, and "Retromuff". Each possesses a sing-along quality drawing you into Mishkin's lyrics, which alternate between straight-ahead rock chants ("If this is love in decay / Hey! Knock yourself out!") and clever turns of phrase ("I knew you went lost in an avalanche while searching, searching / I hope you catch what you're hunting for / A literal piece of the basement floor.")

The critical question for Hot IQs to consider is How many different sounds do they have to offer? Repeat listens reveal some interesting keyboard and vocal layers but by the time the fourth track rolls around it's utterly clear what a Hot IQs song is going to sound like. "Web In Front," the Archers cover, would come off like an original if you weren't clued in, which is both a compliment and a criticism. One wonders how ten or twelve of these songs will hold up on an album. Will it be too much? Will they blend together? Is the band capable of subtler moments? At many points on this EP, one part of a song is pushing us into the next part of the song; why not let some of those parts linger and develop into something unexpected? The success of Hot IQs' next release will also depend on how the band approaches the challenge of constructing high-low album dynamics. It might be worthwhile for them to explore some quieter arrangements or to apply their catchy song structures to longer songs, using space to their advantage.

It wouldn't be worth asking these questions if it seemed like Hot IQs had already reached their creative peak. This EP rocks with the authenticity of a band just beginning to hone in on something infectious, on a sound that will unfold over a series of increasingly better records. With the quality of Mishkin's voice and the talent of this band, they certainly should be capable of expanding on the sound they've mastered here. Ultimately, as far as EPs are concerned for up-and-coming bands, this is a killer calling card.