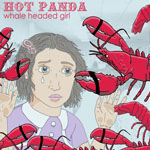 I am from Edmonton, and I used to play in a post-rock/shoegaze band. This is not a rare thing. For a city of its size, Edmonton contains a surprising number of people who have been in post-rock/shoegaze bands, though dance, hip-hop and country acts seem to get the most attention. Something about our big gray prairie sky begs imitation, and the music scene is full of bands that seem to have taken a rolling pin to their songs, spreading them out into long, broad, and often slightly boring reverbfests. (I was part of it, so I'm allowed to say it.)

It is as an Edmontonian, then, that I am particularly pleased to announce that Hot Panda is the antithesis of post-rock/shoegaze. When you see that the cover of Whale Headed Girl, the debut EP from Edmonton's Hot Panda, features a drawing of a girl with an entirely human head staring tearfully into an aquarium full of restrained lobsters, you're forced to question whether this whole whale business isn't just a metaphor, and if Hot Panda might just be another band promising rock, but offering only allusions to rock. Too many groups seem to think that they can get by on just the emblematic strength of a Boss distortion pedal. But by the end of opener "It's Worth 8 Dollars" these fears have been swept away in the wake of the group's sharp hooks and buoyant energy -- and to top it off, halfway through track two, there she is, the titular whale-headed girl, evoked in Chris Connelly's markedly theatrical wail: "Have you heard the one / The one about the girl / With a whale's head / And a lobster tail?" The lyric itself also serves as a handy metaphor for the way Hot Panda not only delivers the goods, but always brings something extra to the table (. like a lobster tail!). This band isn't about symbolism and navel-gazing; it's about trying to cram as many golden moments as possible into each song.

Whale Headed Girl is a record where -- get this -- things happen. "It's Worth 8 Dollars" alone features just the right amount of cowbell (I hope I've coined a new catchphrase), gang vocals, keyboard solos stolen from 8-bit videogames, and a haunting and fantastically high vocal solo by drummer Maghan Campbell. The title track contains not only the story of the whale-headed girl, but also several inconspicuous and effortless time changes. Even the minimal two-minute instrumental, "Gliese 581c", manages to keep up, and it's also the perfect song to dial up on your iPod if you want to feel like you're living in a Terry Zwigoff film. The EP loses a little momentum on "Winter Beast", and the perpetually charming keyboard begins to wear a little thin, but the album ends on a high note with "Chinatown Bus," in which Hot Panda prove they can write an engaging song without the generous ornamentation of other tracks.

The anti-literary lyrics and their delivery are a major part of what holds it all together. It won't be long before the word "trademark" is being tacked on before the word "vocals" in Hot Panda's reviews. Connelly half-sings, half-drawls, and while some melodies evolve into a scream, others sound headed for a spittoon. The lyrics, while often fanciful, also hit on moments of startling realism. "There are things about you I don't want to know / Don't know what you look like without any clothes / I don't even think that I'd like to find out / Might be weird" says Connelly, distilling the awkward sexual tension that floats around bars into one simple verse, an embarrassed and dubious rejection. This simplicity is Hot Panda's strength. Simple melodies, literal phrases, and garage-y rock come together on the EP with the ethos that what you see is what you get. All the simple threads weave together and alchemically create something that's actually kind of complex. Which, in the end, is a more impressive accomplishment than being able to make maritime metaphors.