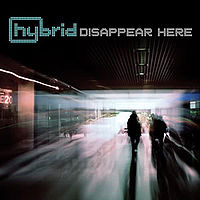 The overzealous following Hybrid hold amongst a certain kind of dance fan has always struck me as silly. They are renowned for supposedly making intelligent, accomplished electronic music but this strikes me as a mixture of blokey, conservative “proper music” thinking and simple naivety.

The band came to widespread attention in 1996 with a track called “Symphony,” which sampled from Górecki for the basis of its hook. This was something of a novelty in 1996 and few clubbers were well-placed to trainspot the sample, so the track became a club hit. The earnings from “Symphony” allowed Hybrid to pursue this symphonic-breakbeat experiment on a more lavish scale, and their follow-up records began to feature real orchestras instead of string-sample libraries. Soon “Symphony” had been re-recorded as “Finished Symphony” with the help of the Russian Federal Orchestra and was the lead single for the band’s debut Wide Angle (1999), a suitably pretentious faux-cinematic opus.

From there they’ve gone from strength to strength, their reputation entirely built on this original novelty of hearing full orchestras on dance records. The orchestra is the sole signifier of everything Hybrid’s music is supposed to be: epic, sophisticated, technically accomplished, and so on. Without it, their music is no more complex or nuanced than any of their peers, and yet Hybrid themselves clearly buy into their own mythology. Disappear Here aims to “push boundaries” (per the press release) but actually regresses the band’s sound further yet into conservative song structures and stadium-rock arrangements, a direction they’ve been headed in for the past decade. The future-shock breakbeat science of their early material has now been almost completed erased in favor of insipid live drumming and frequent vocal contributions from Charlotte James. Even the song titles are cliches: “Can You Hear Me,” “Break My Soul,” “Numb.” It’s a strange, myopic snobbery that has always made Hybrid think of themselves as better than simplistic club music, but the only promised land they can envisage is this dull dance-rock cul-de-sac.

The ironic part is that Hybrid have always been excellent dancefloor producers, and the studio expertise that makes Disappear Here such a polished listen really shines on the 12” mixes. Take lead single “Formula Of Fear”: on the album it’s a passable verse-chorus rock song complete with guitar and piano, which presumably pushes boundaries with its protracted intro and its reinvention of the middle-eight as the middle-32 to stretch the template out to seven minutes. Head over to the single and check out Hybrid’s own remix and you’ll find an absolute monster: a techno-laced banger that starts off in 4/4, warps into bone-crunching breakbeats for the mid-section and then reprises its thunderous bass line with a flourish. The same hooks actually sound considerably more inventive when interpolated into this context: James’ vocals are dubbed out, processed and turned into a haunting layer in the mix while the piano riff is reinvented as a kind of shimmering refrain you don’t usually hear in this kind of record. The raw materials are here to create a very interesting album, but Hybrid’s misguided urge to transcend their native medium scuppers any chance of it actually materializing.